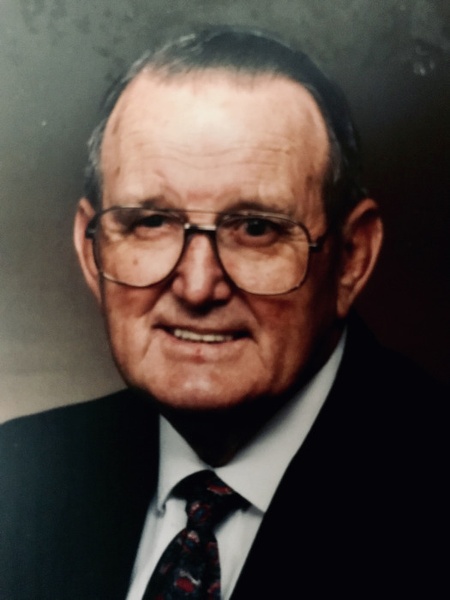 Willis Ransom Burton, our beloved father and grandfather, passed away December 31, 2018 in North Logan Utah.  Recently, when asked if he was going to make it to 100 years he replied, “close enough”.  He was born in Treasureton, Idaho on March 30, 1919 to George Burton and Mary Elizabeth Ransom.  He was the eleventh of thirteen children.  He spent his early childhood helping his family on the dry farm while his father herded sheep.  As a child of the “Great Depression”, the family farm became the means of survival for Willis and his extended family.  Willis loved learning from an early age and excelled throughout his school years.  Cleveland was a close-knit community where he and his fellow students built lifelong friendships.  While a teenager he became Cleveland’s official school bus driver and only ran off the road one time.  Also, during his teen years while working on his ‘worst job’ as a pig farmer he came to the realization that an LDS church mission appeared very attractive.  He served an LDS mission with very little purse and script to the Central States Mission from 1940 - 1942.  He loved his mission and gained his eternal perspective on life.  On Dec 7, 1941 while visiting a family he and his companion heard about the attack on Pearl Harbor – he immediately knew that his life was irrevocably changed.  As one of the  greatest generation, he enlisted in the US Air Corp in 1942 and served his country for the following three years.  While stationed at the Barksdale Air Force Base in Louisiana he met Virginia Grace Bryan at a USO dance, and he knew a good woman when he saw her.  They were married September 15, 1944 in Shreveport, Louisiana.  This marriage of 71 years was solemnized in the LDS Logan Temple in 1945.  They were the parents of seven delightful daughters and two sons.

Willis has always had a love of horses from his childhood until his last days.  Horseback trips, sheriff posse rides, and hunting trips provided great entertainment for him and his family.

Willis worked hard in all the endeavors of life including farming, selling farm equipment, mining, insurance sales and management.  He was an excellent provider and saw to all of their children’s BYU college education.

Willis’ testimony of his Savior began in his youth and was strengthened by his lifetime of service to his fellowman both on a personal level and through his callings in the Church of Jesus Christ of Latter Day Saints.  Willis and Virginia also served a Tennessee Nashville Mission and several service missions in Salt Lake City.  Over the years, Willis and Virginia’s home became a place of refuge for many young people from near and far – Korea, Germany, Ecuador, England, and parts of the U.S.  Deep friendships have resulted from these experiences.  Many of their grandchildren also considered their grandparents’ home as a place of refuge when life became overwhelming or while continuing their education.

The family would like to thank the staffs of Cache Valley Assisted Living and Logan Legacy for their diligence and thoughtful care of Willis and Virginia.

Click the "Red Arrow" to listen to funeral services. You may also order copies by clicking the "Order" button.
To order memorial trees or send flowers to the family in memory of Willis Ransom Burton, please visit our flower store.
Send a Sympathy Card