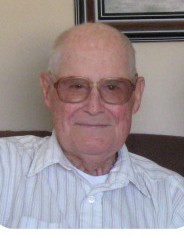 Wayne R Swann was born on November 13, 1931, the sixth son of Ephraim and Elma Swann.  His father passed away a year later leaving Elma six boys to raise.

Wayne attended school in the Preston School District.  While in high school, Wayne participated in football and played on the front line as a guard and tackle.  Wayne was also a member of the FFA and the Letterman club.  He also sang in the choir and participated in the high school opera.

Wayne joined the Army in 1950 and served in the Korean War.  He served in Korea where he was wounded and received the Purple Heart.  The rest of his service was in Japan.  After the war, he returned home and started working construction.  He was a member of Local 3 of the Operating Engineers for over 50 years.

Wayne met Vadna Petersen and the relationship flourished.  She was a widow and had four grown children, so Wayne gained a family.  They eloped to Las Vegas and were married on December 27, 1982.  They lived in the Salt Lake area for the next fifteen years.  In 1998, they moved to Ivins, Utah where they spent the next fifteen years.  In 2013, they moved back to the Salt Lake area to be closer to family.  Vadna’s health was declining and she passed away on April 9, 2014.

Wayne and Vadna enjoyed traveling.  They bought a motor home and would travel to visit family and friends.  Family was important to them and staying connected with them was also important.  When Vadna died, Wayne moved back to Preston.  He had a home and yard where he could putter and take care of things.

Wayne’s health started to decline and in the summer of 2018, he moved into the Heritage Home, an assisted living facility.  In December of 2019, his health had declined to the point that he moved into the FCMC Transitional Care.  He died here on February 2, 2020, at 88 years of age.

The family would like to thank Dr. David Beckstead and the staff at FCMC Transitional Care Unit and the staff at Heritage Home for the care and concern they gave to Wayne.  Memories and condolences may be shared with the family at webbmortuary.com

To order memorial trees or send flowers to the family in memory of Wayne R Swann, please visit our flower store.
Send a Sympathy Card