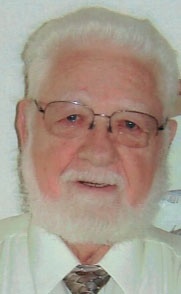 Wayne Eugene Jones, 86, passed away peacefully in his home in Clifton, Idaho, on Thursday, January 24, 2019. His wife, Sally Jones who had taken care of him was there when he returned to his heavenly home.

Wayne was born November 11, 1932, in Carter, Oklahoma to Charlie Judson Jones and Alice Rachel Roles Jones. He was the third son of 5 boys, and was raised on a farm. After graduation from high school he enlisted in the US Air Force and served in the law enforcement and security field until 1972. After Wayne retired from the US Air Force he worked for the Division of Corrections for the state of Alaska in Fairbanks until the spring of 1983. Wayne then moved to Clifton, Idaho where he resided until his death.

He was married to Joann Puckett, they had one son, Terry Wayne Jones. They later divorced. In 1959 he married Peggy Dawn Cloward. She brought three children to this union, Cody, Billie, and Dusty. Together they had a son, Bruce Jones. Peggy passed away in 1983. On August 30, 1986, Wayne married Sally Allison from Ashton, Idaho. Sally had five children who Wayne loved as if his own, Jim, Julie, Brett, David, and Paige.

Wayne was a devoted disciple of Jesus Christ. He was an active, faithful member of the Church of Jesus Christ of Latter-Day Saints. He loved doing family history for those who had passed before him.

In lieu of flowers, please consider contributing to the Church of Jesus Christ of Latter-Day Saints Missionary Fund, or the Perpetual Education Fund.

Click the "Red Arrow" to listen to funeral services. You may also order copies by clicking the "Order" button.
To order memorial trees or send flowers to the family in memory of Wayne Eugene Jones, please visit our flower store.