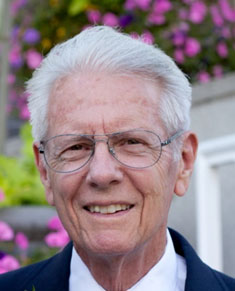 Walter Eugene Wunderlich passed away on February 12, 2017 in Clearfield, Utah. He was born on September 20, 1933 in Los Angeles, California, the son of Jean and Jane Burlingame Wunderlich. He served an LDS mission in Swiss-Austrian mission from 1955 to 1957. After returning from his mission, he married Colleen Swainston on June 18, 1960 in the LDS Los Angeles Temple.

He was raised in the Los Angeles area. From 1947 to 1950 he lived with his family in Frankfurt, Germany. He graduated from Stanford University in accounting and economics in 1955. He then earned a Juris Doctorate degree from Hastings School of Law in San Francisco in 1962. Most of his career was as an attorney with the State of California Attorney General's Office. He served as president of the Germany Berlin Mission from 1994 to 1997.

He is survived by his wife Janet, his five children (Katherine, Eric, Philip, Rachel and Jonathan) and 18 grandchildren. He was preceded in death by his parents, sister, and wife of 49 years, Colleen Swainston Wunderlich.

Funeral services will be held on Saturday, February 18, 2017 at 12:00 noon at Webb Funeral Home, 1005 South 800 East in Preston, Idaho. A viewing will be held on Saturday from 10:30-11:30 a.m. at the funeral home. Interment will be in the Preston Cemetery. Memories and condolences may be shared with the family at www.webbmortuary.com

To order memorial trees or send flowers to the family in memory of Walter Eugene Wunderlich, please visit our flower store.
Send a Sympathy Card