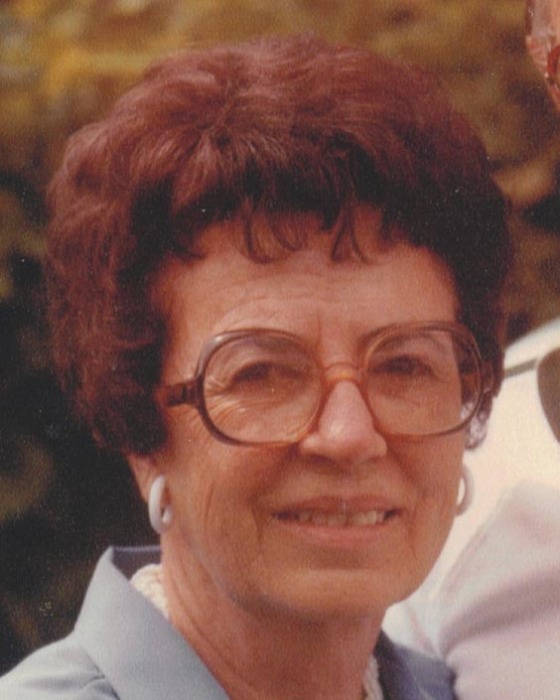 Virginia Callan Merrill was born October 3, 1921, at the "Callan Family Home" , built by her own father,  in Dayton , Idaho, the youngest of 7 children born to Steven James Callan and Emma Hulet Callan. She was reunited with Our Savior and her immediate family members on August 28, 2016 and is now celebrating a joyful  forever reunion with her husband Samuel Wood Merrill, her parents, brothers and sisters and other family and friends whom have been anxiously waiting for her. Sam and Virginia and the "Callan Family" are once again complete and will be together forever.

Virginia was raised on the family farm in Dayton , Idaho, and attended grade school in Dayton. She was always a very hard worker and spent her summers working on the farm in the beet fields, caring for all the animals and helping her mother and other family members. She lost her own father at 3 months of age. Some of her fondest memories were  playing with her sisters and cousins in the huge barn next to her home, swimming in the irrigation ditches in the summer and sledding down the snow- filled fields in the winter.
Virginia attended and graduated from Preston High School in 1939, after which she attended Brigham Young University where she received her Baccalaureate degree in Education. She loved teaching and taught 7th and 8th Grade Reading/English in the Preston Idaho School systems for over 33 years. She also taught physical education and coached women's sports at the junior high school whenever she was asked.
Virginia met a very handsome young man at a church dance, who became the love of her life, and soon she married Samuel Wood Merrill on June 12, 1947 in the Logan LDS Temple. They had two children, Robert S. Merrill and Marcia Merrill. Virginia always loved raising her children and helping Sam with all of his  many various building projects and shared in the love of flying his small aircraft and managing the Preston Airport. Virginia spent every weekend during the summer helping Sam build their family cabin at Palisades, Idaho. This was truly a labor of love helping to build a legacy for her family. Virginia was always known for her sweet, loving spirit and being a peacemaker with everyone.

The Merrill Family would like to offer a very special thank you  to all family and friends who have offered any form of kindness to Virginia and also to Thelma Roley who has assisted both Virginia and Sam with special personal cares during last years of both of their lives.

Funeral services will be held on Thursday, Sept. 1, 2016 at noon at Webb Funeral Home, 1005 South 800 East, Preston, Idaho with President Dax Keller conducting.  Friends may call Thursday from 11-11:45 a.m. at Webb Funeral Home.  Interment will be in the Dayton Cemetery.  Memories and condolences may be shared with the family at www.webbmortuary.com

To order memorial trees or send flowers to the family in memory of Virginia Merrill, please visit our flower store.