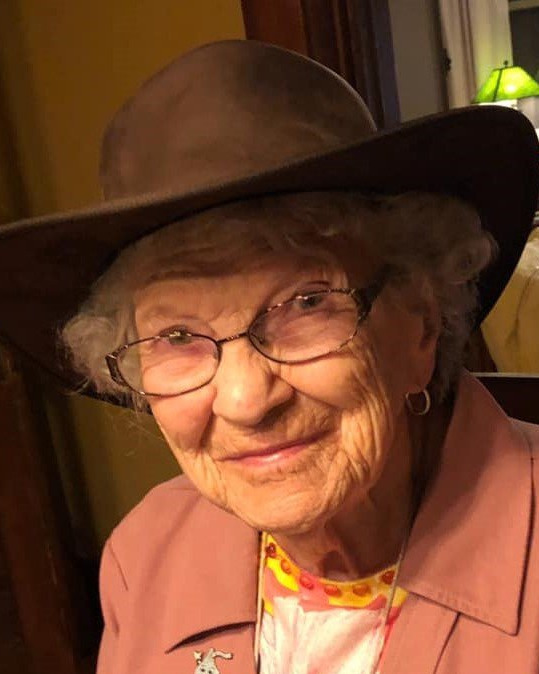 Virginia D. Fleming, born December 3, 1924, died Sunday, November 13, 2022, in Tucson, Arizona. She was born in Red Lodge, MT, the daughter of two Montana natives. She was premature -- there's a little confusion about how premature, and how much she weighed, but the family legend (repeated by her many, many times) relates that the doctor told her parents not to even take her home, and certainly not to get too attached, because she would not survive. They ignored the doctor, took her home and improvised an early-20th-century incubator by putting blankets in a wooden letter inbox on top of a steam radiator. She not only survived, but lived longer than anyone in her family (repeated by her many, many times).

She was named Hazel Virginia. She hated the name Hazel, and through a series of bureaucratic snafus in her mid-80s she finally got to legally change her name to drop it. That made her smile a lot.

She met William Fleming at a wartime dance in Bozeman, MT, when a friend set up a blind date between them. William showed up at her sorority house hours early, asked her if she had ice skates and knew how to use them, and whisked her away for a pre-dance impromptu skate date. After skating with her for an hour or so, he asked her if she would mind if he skated by himself for a couple minutes. She sat down and watched this presumptuous Montana farm boy skate fast, backwards, twisting, dancing -- and she was in love.

They raised four children together in Richmond, Utah. Soon after William’s death in 2004, she moved to Tucson to be near family. In her new home, she soon found everyone with any connection to Montana, and even went to Spain with one of them. Los abuelas were there for her friend's grandson's wedding, and she had to get her first passport for the trip. She was in her 90s at the time.

She lived through the depression, World War II (her high school graduation was in May, 1942), the Cold War and hiding in basements, raising children, watching a moon landing (on the television she and William had to buy in 1969 -- the first working television they had owned since about 1955) and worrying about the possibility that one of her sons might end up in Vietnam. And always pleasant, eager to meet people, and to find out what connection they had with Montana.

If you were born, married, had a child or any other life event on November 13, she is now sad that she didn't have a chance to figure out the connection she shared with you. Especially if it involved Montana.

She is survived by sons Ron, Robert (Rhonda) and Steve (Sunny), seven grandchildren (Brian, Erik, Nathan, Robyn, Amy, Erin and Will) and six great-grandchildren. Preceding her in death were her husband William, her daughter Charlene Mink, her granddaughter Melissa and grandson David Mink.

Virginia will be missed by all. She was always a good sport through tough times and happy to share good times with anyone willing to join her. She was always eager to befriend others. We all learned so much from her and know we should have learned more. She was a survivor, a wit and a social adept.

Services will be at St. John’s Episcopal Church, 85 E. 100 N, Logan, at 10:00AM on November 26, followed by burial at the Richmond City Cemetery (which, in an irony she would appreciate, she managed as Richmond City Clerk for several years), 350 N. 200 E, Richmond, starting at Noon. There will be a reception afterwards at the Park Community Center, 6 W. Main St, Richmond, beginning at 12:30PM. Memories and condolences may be shared with the family at webbmortuary.com

In lieu of flowers, you could consider supporting her longtime parish, St. John's Episcopal Church, 85 E 100 N, Logan, UT 84321. If you’d rather be more secular, you could honor her memory by donating to the United Way of Cache Valley, 88 W Center Street, Logan, Utah 84321, where she worked for a number of years on the annual campaigns.

To order memorial trees or send flowers to the family in memory of Virginia Draper Fleming, please visit our flower store.