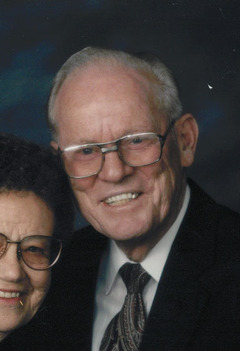 Vern Erwin Klippert, 98, passed away Thursday, June 16, 2016 in Idaho Falls, Idaho. He was born May 17, 1918 to William Frederick Klippert and Lucy Jane Dabb in Preston, Idaho. Vern married Maurine Birch Larsen in the Logan LDS temple on August 9, 1946 and together they had four children: Vicky, Marlene, Steven, and Kayla.

Vern served in the military during WWII in the Air Force as a navigator on the B17 bomber planes. Upon returning from his service, Vern worked as a postal worker and continued to do so until retirement. Vern and Maurine made their home in Preston, Idaho. He was an active member in the LDS church serving as a bishop in the Preston 1st Ward and as a ward mission leader. Vern is most noted as a scoutmaster in the community and earned the Silver Beaver award for his service. From 1986-87, Vern and Maurine served a mission together in Fort Lauderdale, Florida.

Vern was an avid fisherman, hiker, camper, and outdoorsman. He enjoyed cultivating his garden, working on his handicrafts, and making raspberry jam with his wife, Maurine. He was devoted to his family and cared very deeply for Maurine during the last years of her life. His example of love, devotion, and service are of great merit to those he leaves behind.

He is survived by his four children: Vicky (Merrill) Turnbow; Marlene (Rex) Petersen; Steven (Camille) Klippert; and Kayla Klippert; 16 grandchildren and 23 great-grandchildren; and his younger brother Myrl (Conna) Klippert. He is preceded in death by his parents, siblings, and wife.

Funeral services will be held Saturday, June 25, 2016 at 11am at the Preston 1st Ward chapel at 213 South 200 East in Preston with Bishop Jeff Lords conducting. A viewing will be held Friday, June 24, 2016 from 6-8pm at Webb Funeral Home and Saturday from 9:30-10:30am at the church. Interment will be in the Mink Creek Cemetery. Memories and condolences may be shared with the family at www.webbmortuary.com

To order memorial trees or send flowers to the family in memory of Vern Erwin Klippert, please visit our flower store.
Send a Sympathy Card