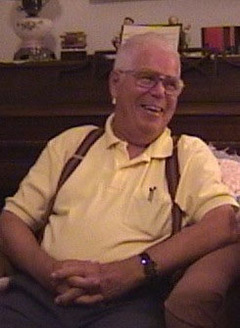 Theodore (Ted) Bickmore Larsen, age 95, of Las Cruces, New Mexico, died on June 30, 2015.  Ted was born August 23, 1919 in Preston, Idaho to Jacob Nelson Larsen and Ellen Oldham Bickmore.  In the fall of 1939, he was called to serve a mission to the Spanish American Mission for the Church of Jesus Christ of Latter-day Saints.  After his LDS mission of two years, Ted enlisted in the United States Navy and spent four years serving until World War II was over.

Ted attended Utah State and received his Bachelors.  He was in business with his father J.N. in title insurance, real estate and general insurance in Preston, Idaho.  In 1967, he moved his family to Las Cruces, New Mexico and received his Masters at New Mexico State University in education.  Ted taught in the Gadsden School District until 1985.  He then worked at the Monarch Real Estate Corporation of Las Cruces until full retirement.

Ted loved hiking, taking photos, playing tennis and golf and eating ice cream and chocolate.  As a member of the Church of Jesus Christ of Latter-day Saints, he served in many callings throughout his life.  He was truly a gentleman and example to all he met.  He will be greatly missed by his family.

Funeral services will be held on Wednesday July 8, 2015 at 12:00 noon in the Preston North Stake Center, 310 North State Street in Preston, Idaho. A visitation will take place Wednesday from 11:00-11:45 a.m. also at the stake center. Interment will be in the Preston Cemetery.

To order memorial trees or send flowers to the family in memory of Theodore "Ted" Bickmore Larsen, please visit our flower store.
Send a Sympathy Card