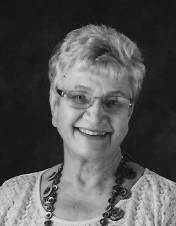 In 2003, Thedora Ames Petterborg penned, “What a great life it has been for me so far and I have so much more to look forward to.”

“Teddy” was born to Nels Owen and Ruby Drusilla Hillman Ames in Preston, Idaho May 15, 1937. Her childhood was filled with travel between Cleveland and Oxford, visiting her grandparents. She wrote, “I felt like I was the luckiest girl alive because I had lots of cousins that would visit at both my grandparents’ homes.” She spent eighth grade in California and then moved back to Preston where she had numerous friends, was active in the high school choir and Spanish classes, and met her lifelong sweetheart, Dee Ronald Petterborg.

Thedora and Dee graduated in May 1955, were married that September in the Salt Lake Temple, and made their home on the Petterborg family homestead. Their love of travel began early with a honeymoon in Vegas and Utah’s great parks.  They later travelled to Branson, Missouri; Washington DC; NYC, Hawaii, and across North America, and Europe. She and Dee invited many of their grandchildren along for the ride, often enjoying theatre productions along the way

Thedora worked at Peterson Tractor Service for a time and then raised her five children, all two years apart. Once the children were grown, she returned to work, serving as a Deputy Clerk in the new Franklin County Magistrate Court in the early 1970’s. Later she worked 18 years as the Preston High School Secretary, which led to a cameo in Napoleon Dynamite. At age 55, she began a new career as a Licensed Massage Therapist and found great meaning in healing the aches and pains of her family, friends, and neighbors in her home business.

She held many positions in The Church of Jesus Christ of Latter-day Saints, often working with youth as she and Dee chaperoned dance festivals and other trips to Salt Lake City. She taught her children to love others freely and she generously welcomed all into her home.  She loved people and will leave a void in the hearts of her many friends and family.

On the evening of Wednesday, November 27th, 2019, Thedora passed away surrounded by family in the Franklin County Medical Center. Her parents, husband, and brother, Dwight C. Ames, preceded her in death, and she is survived by her brother, Dennis of Nampa, her children Cindy Wilson (Wayne) of Meridian, Idaho, Jan Hull of Richmond, Utah, Terry Dee Petterborg (Pam) of Preston, Sandra Tondini (Rob) of Preston; and Phil Dee Petterborg (Andria) of Greenville, Wisconsin. Also surviving her sister-in-law Lorene Call Ames of Pocatello, many nieces and nephews, 24 grandchildren, and 32 great-grandchildren. Thedora lived life with gusto and never once passed up an opportunity.

To order memorial trees or send flowers to the family in memory of Thedora Petterborg, please visit our flower store.
Send a Sympathy Card