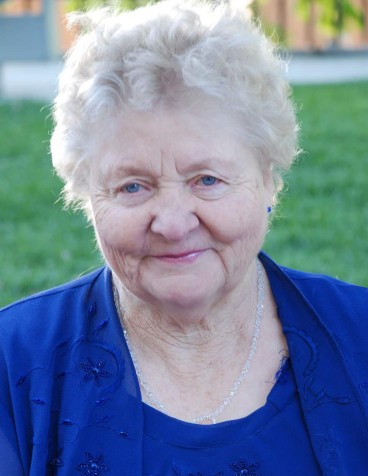 Long-time Cache Valley resident Shirley Ford Rawlings died peacefully of natural causes May 2, 2018. She was born March 10, 1934 in Lewiston, UT, the youngest child of Hazen Merlin and Rosa Mae Call Spackman. Her mother, a former school teacher, taught her to read before she attended formal school. She grew up in the Lewiston 2nd Ward and graduated from North Cache High School. A physically strong farm girl, she rode horses to work the derek and plow the fields. At 10 she made farm deliveries with the farm truck and drove tractors. She worked side by side with her mother, father and four siblings to take care of beet crops, the dairy cattle, and the family garden. And she still had interests in art and home decorating.

She played the flute in the high school band, was Miss Lewiston, and participated in plays and musicals. As an art major she attended USU where she met and then married John Wallace Ford on March 17, 1953. They welcomed seven children. That marriage ended in 1987. In 2006, she married Darwin Rawlings.

She professional created draperies at Trend Interiors, and she spent many years in food services working first at the Sky room at Utah State and then the Logan Regional Hospital where she retired.

Shirley was known for her community activity. She was part of the Logan Cache Community Band and was president of the Bel Cantos chorus during her decade of membership. She also sang with the Northern Utah Choir and traveled to various parts of Europe and even Russia during one of their tours. She still led or sang in choirs and sometimes performed solos well into her late 70s.

Shirley is revered as a faithful woman who loved the Lord and instilled deep faith in her children. She was all about learning and earning, and led by example as she faced hard things with grace, grit, and a belief that things will turn out. Her grandkids remember her as a handy woman on a cook's salary who rehabbed or built her primary residences in Logan, Richmond and Hyde Park, featuring space to accommodate large family gatherings, places for kids to play, and beautiful gardens and yards. She made and designed personal quilts for each one of her grandchildren and great, great children. No one could turn simple or overlooked resources into beautiful things like she could She walked the talk of thrift, service, and love.

For most of her adult life she served various callings in Primary, was usually the Primary chorister, and later was a Relief Society president. She served two missions for the LDS Church, one in Charlotte, North Carolina and one in Chicago, Illinois. She also worked in the Logan Temple.

Funeral services will be held Saturday, May 5, 2018 at 12:00 noon in the Hyde Park 9th Ward Chapel at 65 East Center Street in Hyde Park. A viewing will be held Friday from 6-8 p.m. at Webb Funeral Home in Preston and Saturday from 10:30-11:30 at the church in Hyde Park. Interment will be in the Preston Cemetery. Memories and condolences may be shared with the family at www.webbmortuary

To order memorial trees or send flowers to the family in memory of Shirley Mae Rawlings, please visit our flower store.
Send a Sympathy Card