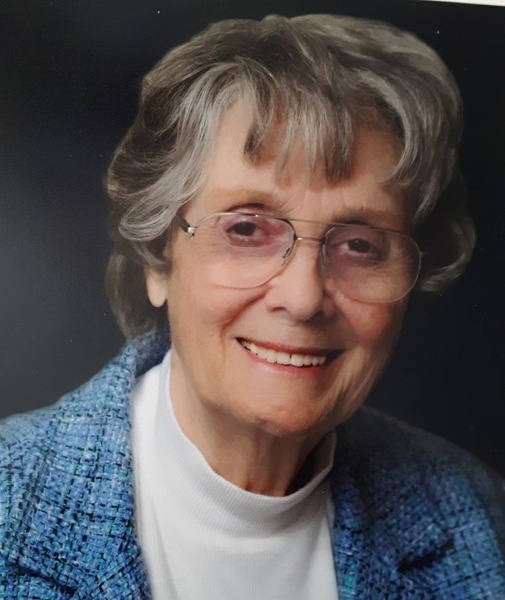 Shirley Elaine Ostler passed peacefully from mortality on January 22, 2020. She was 89 years old.

Shirley was the first child born to Earcel Murdock Ostler and Cleone Steed Walker. Her birth on July 1, 1930 in Salt Lake City, Utah was soon followed by the births of her siblings: Melvin, Don and Lannice. She loved her brothers and sister and created many fond childhood memories of playing in irrigation ditches, eating fresh fruit right off the trees and spending one summer during the Great Depression living at Yellowstone Park while her father painted the lodge. After Shirley’s parents’ divorce, Earcel married Leah Bickmore and Shirley was delighted to have another brother when Larry was born.

Shirley attended Santa Monica City College where she met Charles Williamson. The two were married in 1950 and were blessed with four daughters: Carol Jo, Catherine Janelle, Carla Jean and Christianne June. Shirley was a hardworking and devoted mother and was a skilled home manager. She loved her four daughters. Shirley’s marriage to Charles ended in divorce in 1972. In 1985 she married Kenneth Hayden. That marriage also ended in divorce.

Shirley did her best to live the gospel regardless of her surroundings.  As a young mother even though she did not drive, she got her first three daughters ready for church each Sunday,the party of four would then walk to the bus stop and ride it to church every week. By the time Chrissy was born, she learned to drive. She joyfully continued in her activity in the Church of Jesus Christ of Latter-Day Saints. She served in many presidencies including as District MIA President in Palm Desert, California in the 1960s. She led by encouraging the youth to lead out including in Road Shows: helping them to write the scripts. She enjoyed acting and directing. She loved the outdoors and was an enthusiastic backpacker and camper. She volunteered as a Girl Scout Leader and led church backpacking events for the Young Women including 50 mile hikes in the High Sierras of California. Shirley also loved to sing. Whether in the car with her family, or while doing household chores, or in church choirs, whenever it was possible to sing, she sang. Indeed Shirley could burst into song in any situation.

Shirley had a lifetime love for learning and education. When her children were older, and with a nudge from daughter Carol, Shirley returned to college earning her Bachelor's degree from Cal Poly Pomona, and then as a single parent, she earned her Master’s Degree from Cal State Northridge, another Master’s Degree from the University of Southern California and finally her PhD from USC in 1987. Although she began her college education in Child Language Acquisition, she soon discovered her passion and heart were in the study of Linguistics and ESL which complimented her natural love for and interest in all cultures.

Shirley was born to teach. At church she taught Primary, Sunday School, Relief Society and seminary. It was no surprise when after earning her PhD from USC she accepted a teaching position at Bowling Green University in Ohio. While Shirley’s life would take her far from her family at times, she remained involved in the milestone events in their lives. As long as she was able, she sent Valentine cards to each of her children, grandchildren and great-grandchildren every year and visited or called when she could.  While a student at USC she taught ESL and later taught in “the wives’ program,” an English language program for the wives of foreign dignitaries whose husbands were studying at USC. She was enriched by these women from all over the world as they shared cultures and languages. She loved teaching so much that she continued as an English Professor at BGSU until in 2007, at age 77, she retired and moved back home to her roots in Salt Lake City, Utah where she continued to help others learn by tutoring from home and volunteering at a community college.

Services will be held January 25, 2020, at the Dayton, Idaho Ward, 825 N. Westside Hwy. The viewing will be from 1:00 - 1:45 pm followed by the funeral at 2:00 pm. Interment will be at the Dayton, Idaho Cemetery.. Memories and condolences may be shared with the family at: webbmortuary.com

To order memorial trees or send flowers to the family in memory of Shirley Elaine Ostler, please visit our flower store.