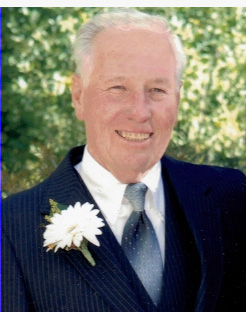 Our kind and loving father, grandfather, and great-grandfather, Sherwin W. Larsen returned to the arms of loved ones on October 7, 2017 surrounded by his family and loving caregivers in Hyde Park, UT.  Dad was born on May 16, 1932 to Ambrious Titensor and Jessie Wilkinson Larsen in Cove, Utah. He married Gloria Williams in the LDS Temple on January 25, 1957.

Dad was raised in Cove, attended North Cache High School and USU. He honorably served his country in the U.S. Navy in the Philippines and was very proud of his service. Dad owned and operated Larsen Service, in Cove, until the age of 70.  Dad‘s true enjoyment was his family, working on vehicles, yardwork, cooking Dutch-oven chicken and potatoes on weekends for family and friends. He was a quiet man with a big heart and would help anyone in need.

Dad will be greatly missed by his loving family. He is survived by his 3 daughters; Lexy Jensen (Casey), Diane Anderson (Byron), and Sam Douglass (Brady). He is also survived by 9 grandchildren, 12 great-grandchildren (with one little guy on the way), a brother (Boyd Larsen) and twin sister (Shirley Robinson). Dad was preceded in death by his loving wife, parents, and sister (Barbara Hendricks).

Special thanks to Autumn Care’s caregivers and Director Xochithl Frankman, Symbii Home Health and Hospice nurses Leslie and Lindsay. Words can’t express how grateful we are as a family for your compassion and thoughtful care given to our dad.

Funeral services will be held on Thursday, October 12th at 12:00pm in the Cove LDS Chapel.  There will be a viewing on Wednesday, October 11th at 6:00-8:00 p.m. at the Cove LDS Chapel and Thursday from 10:30 – 11:30 a.m. also at the church. Interment will be in the Richmond Cemetery. Funeral arrangements are under the direction of Webb Funeral Home. Memories and condolences may be shared with the family at www.webbmortuary.com.

To order memorial trees or send flowers to the family in memory of Sherwin Wilkinson Larsen, please visit our flower store.
Send a Sympathy Card