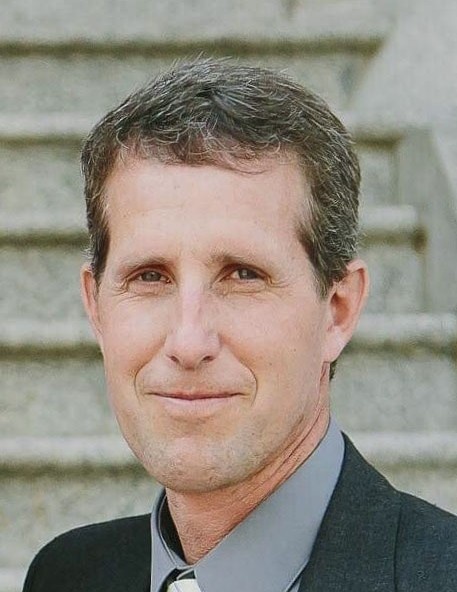 Sheldon LaMont Longhurst 49, peacefully passed away Tuesday October 23, 2018 surrounded by his loving family after a valiant battle with leukemia.
Sheldon was born on January 3, 1969 in San Francisco California to Warren and Sharon Longhurst. He was the second of eight children. The Longhurst family spent a brief time living in Alaska and eventually settled in Arco Idaho where Sheldon spent most of his growing up years. In his youth, Sheldon could often be found riding motorbikes, skiing, woodworking, and working one of the many jobs he had. Sheldon graduated from Butte High School in 1987 and served an honorable LDS mission in Frankfurt Germany.

Upon returning from his mission, Sheldon attended Ricks College in Rexburg Idaho where he met his sweetheart, Candy Craythorn. They were married in the Logan Utah LDS temple on May 31, 1991. Sheldon and Candy lived in Salt Lake City Utah where Sheldon attended the University of Utah. In 1994 Sheldon became guardian to his two youngest siblings Josh and Valina due to the passing of his parents. At this time Sheldon and Candy moved to Kaysville Utah where he attended Weber State University and graduated with a Bachelors degree in Technical Sales and Service. Upon graduating Sheldon opened and operated Rhino Linings of Northern Utah in Ogden and moved his family to the Riverdale Utah area where they lived for several years.

Sheldon’s most prized possession was his family and he could often be found teaching them life lessons. As his children started to get older it was important to him that they learn good work ethic. In 2004 Sheldon sold his business and moved his family to Preston Idaho where they purchased a small farm in Mink Creek. Sheldon had a love for the land and for planting and growing. He loved to share his knowledge, plants and produce. Sheldon was rarely found in the house. He loved to be outdoors working in the shop, the garden, the greenhouse, or on one of his many projects.

He was an active member of the Church of Jesus Christ of Latter Day Saints and served in many church callings throughout his life including two separate bishoprics, ward mission leader, scouting, and Sunday school. He had a great love for scouting and was a beacon of what it meant to be a great human being, touching the lives of so many youth on their journey to adulthood. In the last few months of his life Sheldon became a grandpa and his joy was full. Holding his two grandbabies always brought a smile to his face.

Sheldon is survived by his eternal companion Candy Longhurst, his loving children Jacob (Holly) Longhurst, Tiffany (Spencer) Wheeler, Justin (Cynthia) Longhurst, Mckinley and Emily Longhurst, Two grandchildren Hudson Wheeler and Alice Longhurst, his siblings Colissa, Lupi, Jolana, Norman, Kevin, Josh and Valina, and many nieces and nephews.
Sheldon was proceeded in death by his grandfather Woodrow Longhurst, a niece Kallie Miller, and his parents Warren and Sharon Longhurst.
Funeral services will be held Friday November 2, 2018 at 11:00 in the Preston North Stake Center. Viewings will be held Thursday November 1 from 6-8pm in the Preston North Stake Center and Friday from 9:30-10:30am. Interment will be at the Mink Creek Cemetery .Memories and condolences may be shared with the family at: www.webbmortuary.com

To order memorial trees or send flowers to the family in memory of Sheldon LaMont Longhurst, please visit our flower store.
Send a Sympathy Card