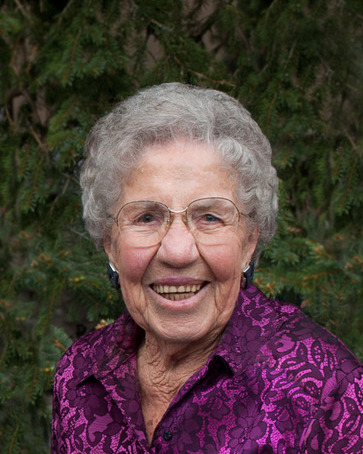 Cornelia Ruth Bruderer Swendsen, 95, of Lewiston, Utah completed her earthly mission and stepped through the veil on Tuesday, Dec. 13, 2022.  Ruth began her earthly life on Feb. 16, 1927, in Logan, Utah, the daughter of Conrad and Anna Ochsenbein Bruderer.  She was the 7th of 15 children, 2 girls and 13 boys.  She received her schooling in the Logan City schools. Upon graduation, she went to work at the Bushnell Military hospital and also, worked as a waitress.

In 1947, Ruth married Robert L. Hicks. They were later divorced.  She also married Corneilus Everett Lane in 1948.  They were later divorced. In 1951, Ruth married Guy Burrett Swendsen and moved to his home in Lewiston.  Over the next 61 years, they built a life together and raised three sons. The family worked together as they built and managed a chicken processing business. They also had a small farm and cattle enterprise.  She was an employee at Del Monte Corp for 20 years.

Ruth loved to learn new skills and her hands were never idle.  She would discover new hobbies and would work to become very proficient at each one.  Then, in turn, she would teach and share those talents with others.  Quilting, crocheting, knitting, genealogy, and candy making were skills in which she excelled.  Each grandchild would receive a hand stitched wedding quilt.  Then, in turn, great grandchildren and great- great grandchildren, would also receive a baby quilt upon their arrival.  This continued until she was 94.  Family, friends, and missionaries would all receive a box of her hand dipped chocolates at Christmastime.

Ruth was a member of the Church of Jesus Christ of Latter-Day Saints, faithfully serving in the Primary and Relief Society organizations. She especially enjoyed teaching and providing adventures for the 11-year-old boys.  Ruth knew that her beautiful voice was a gift. She used this talent to bless the lives of others through singing solos, at countless funerals, 4th of July celebrations, in choirs and other programs.  At times, her sons would join her.  Service to others was an important facet in her life.

Viewings will be held Sunday from 6-8 p.m. and Monday from 10-11:30 a.m. both at the church.  Interment will be in the Lewiston Cemetery.

Our family would like to thank the nurses at CNS Home Health for their excellent care and for putting up with Ruth’s constant teasing, especially Riley, Debbie and Debra.  Memories and condolences may be shared with the family at webbmortuary.com

To order memorial trees or send flowers to the family in memory of Ruth Bruderer Swendsen, please visit our flower store.