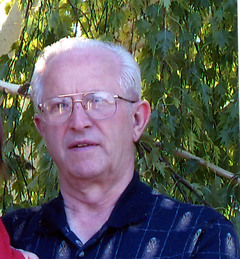 Ross J. Hansen, 81, passed away peacefully on Wednesday, June 29, 2016 at the Franklin County Transitional Care Center in Preston, Idaho. He was born on August 9, 1934, the first child of Deloss and Vera Jane Jensen Hansen.  He was followed by a brother David C, twin sisters Janet and Janeal and sister Kathy.  Ross attended Preston, Idaho schools, graduating from High School in 1952. He was an active member of the Church of Jesus Christ of Latter Day Saints and was married to Karen Dawn Bowers Hansen in the Logan LDS Temple in 1953.

Always interested in electronics, he was often found in his father’s workshop, building  crystal radio sets or other electronic devices, eventually becoming interested in amateur radio.  These were the early years of television which piqued his interest.  He was a Cache Valley radio and television pioneer, raising one of the first TV antennas in Preston on the roof of U & I Furniture.  Ross started his entrepreneurial career early, by repairing radios while in high school and soon advanced to repairing televisions.  He has always had the entrepreneur mindset, constantly watching for new business ventures.  During his life he owned and operated several businesses including those related to photography, radio and television repair, furniture,  ACE and Western Auto hardware stores, television sales and repair, amateur radio, computer and communications equipment sales.  Eventually, Ross Distributing became known throughout the country and beyond. He was included on the lists “top ten” dealers for several leading amateur radio companies.  He put Preston on the map, as “ham” radio operators made a detour or special trip to visit the extensive display of amateur radio equipment.  WB7BYZ is now a “silent key”.  73’s Ross.

He is survived by his wife Karen Bowers Hansen, and children; Kevin, Roxanne (Wally) Gibbons, Kimalee, and Randon, and grandchildren Geoffrey (Shilo) Hansen, Karl Gibbons, Kory Gibbons, Madison Gardner, Kelin Gibbons, Kierra Gibbons, and Sophia Hansen, and great grandchildren Lejind and Gavin Hansen. He is  survived by his siblings Kathy (Keith) Griffin and Janeal (Lynn) Call. He was preceded in death by his parents, sister Janet and brother David.

Funeral services will be held on Wednesday, July 6, 2016 at 12:00 noon in the Preston South Stake Center, 55 East 100 South in Preston. A viewing will be held Tuesday from 6-8 p.m. at Webb Funeral Home and Wednesday from 10:30-11:30 a.m. at the stake center. Interment will be in the Preston Cemetery. In lieu of flowers, the family is requesting donations be made to Donatelife.net.  Memories and condolences may be shared with the family at www.webbmortuary.com

To order memorial trees or send flowers to the family in memory of Ross J Hansen, please visit our flower store.
Send a Sympathy Card