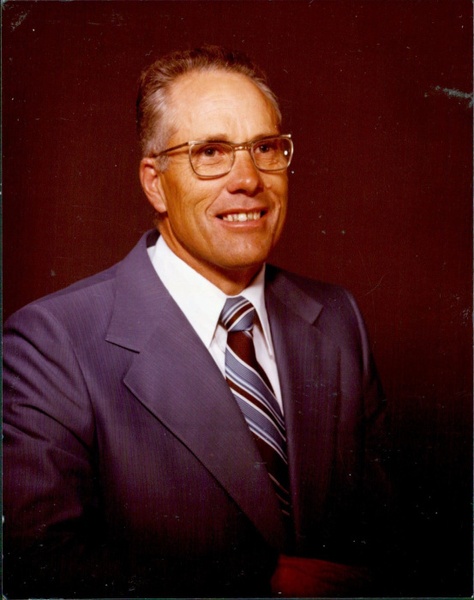 Ross Taylor Barrington, 89, passed away peacefully on March 17, 2021 in Provo, UT.  He was born on February 18, 1932 in Preston, ID to Lewis Aaron and Elva Taylor Barrington. He was raised on the family farm north of Preston, in Riverdale. He married Rea Waddoups on April 3, 1951 in the Logan Temple. They lived most of their married lives in Riverdale.  While serving two years in the US Army, Ross discovered that he had a natural talent for repairing and operating heavy equipment.  He later worked as a mechanic and shop foreman at both Palmer Motors and Palmer Implement, and did the farm work at night or on weekends. He eventually transitioned to having his own custom bulldozing business where he could utilize his natural skills with heavy equipment.  Ross seemed to like anything with a gas or diesel engine.  He particularly enjoyed Harley-Davidson motorcycles and owned one most of his adult life.  He sold his last one when he was 72. Over several years in the 1980s, Ross and Rea spent warmer months in Riverdale and spent winters in Hurricane, UT.  They eventually moved permanently to Hurricane where Ross unintentionally became a pioneer in producing pistachios in Hurricane. He developed an orchard with 162 trees and also developed methods to harvest and process the nuts efficiently. Ross and Rea both served together many years as ordinance workers in the St. George Temple. Rea passed in 2012 and in 2014 Ross married one of Rea’s childhood friends, VaLois Kendal Baker. Ross and VaLois enjoyed 6 years together traveling, attending the temple, and getting to know each other’s family. VaLois’s family made Ross feel like he was one of their own. VaLois passed in March 2020. Ross had a strong testimony of the Gospel of Jesus Christ and he served in a variety of callings in the Church of Jesus Christ of Latter-day Saints. He also enjoyed making friends and helping others whenever he saw a need. Ross was preceded in death by Rea and VaLois; his parents; and his siblings, Lenna and LuWayne. He is survived by his son LaMar (Susan) Barrington, four grandchildren, and four great-grandchildren. Funeral services will be held on Friday, March 26 at 1:00 pm at Webb Funeral Home, 1005 S 800 E, Preston. A viewing will be held prior to the funeral from 11:00 am -12:30 pm.  Please wear a mask while attending the viewing or the funeral. The funeral services will be streamed live and can be viewed by clicking on the following link https://youtu.be/bXe0GgnwnTY Memories and condolences may be shared with the family at webbmortuary.com In lieu of flowers, the family requests that you make a donation in Ross’s memory to the Church of Jesus Christ of Latter-day Saints Philanthropies “Humanitarian Aid” Fund.  https://philanthropies.churchofjesuschrist.org/
To order memorial trees or send flowers to the family in memory of Ross Taylor Barrington, please visit our flower store.
Send a Sympathy Card