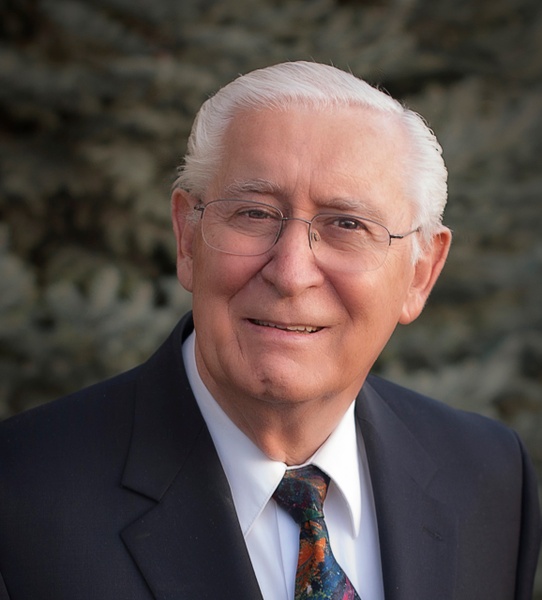 On May 2, 2022, our beloved Ron Lewis (84) left this life to be reunited with his sweetheart Eleanor.

Ronnie Lorin Lewis, the youngest child of Amelia Lucille McGavin and Theron J Lewis, was born in Richmond, Utah in 1937. His older sister and brother, Luann and Gary, adored their baby brother. In later years, the siblings loved to laugh about the games and the pranks they played together, and the way that young Ronnie always managed to burn their toast for breakfast.

Like most of his McGavin relatives, Ron loved to sing and had a beautiful voice. At North Cache High School, his choir teacher convinced him to be in the school musicals, including Brigadoon, where he was spotted by an eighth-grade girl, Eleanor Gunnell. She fell instantly in love with the dark-haired, brown-eyed leading man, and they began dating her sophomore year.

In 1958, Ron was called to serve as a missionary for The Church of Jesus Christ of Latter-day Saints in the Argentine Mission. Though he admitted to being “scared to death,” Ron prayed and worked and grew to love Argentina and the people there. He was even given a special assignment to sing in a quartet of missionaries called “Los Mormones,” and to travel the country giving concerts and singing on the radio. At the end of Ron’s mission, he was counseled by an LDS General Authority to make sure he kept up with the Spanish language he had worked so hard to learn. Ron took that advice and remained fluent in Spanish all his life. Years later he was called to serve in a Spanish Branch. He loved the people of the branch and was so grateful to have been blessed to learn Spanish so he could serve in the branch.

After his mission, Ron enlisted in the U.S. Army hoping to use his Spanish as a linguist for the army. However, when Ron got to training at Fort Ord, he was informed that they needed bakers, not linguists, so Ron was trained in baking and sent to an army base near the Panama Canal. Every morning he would get up at 4:00 a.m., bake all the bread and pies and cookies for the base, and then take classes at the Canal Zone College and enjoy time on the beach.

Returning from his military service, Ron married his sweetheart Eleanor in the Logan LDS Temple. After a job at a credit union, Ron was hired by First Security Bank in Preston, Idaho, where he and Eleanor purchased a home and raised two daughters, Kathryn and Kristen. Home life was filled with music, family road trips, and plenty of love and laughter. Ever the performer, he joined the Northern Cache Valley Theater Guild and appeared in numerous community musicals. He was also involved in the local Lions Club and enjoyed serving and volunteering within his community.

Over the years, Ron continued to serve in the Church of Jesus Christ of Latter-day Saints, including as Bishop of the Preston 5th Ward. He and Eleanor also served as Family History missionaries and were blessed to serve as senior missionaries in Argentina, returning to some of the same wards and branches where Ron had served decades earlier. Their devotion to their family and their faith continues to bless the lives of all who knew them, and we are grateful to know that Ron and Eleanor can continue their mission together.

Ron is survived by his daughters Kathryn (Curtis) Isaak and Kristen (Jonathan) Burton, and by his grandchildren, Chloe, Liam, Tyler, Isaac, Tomas, Audrey, and Nathan. He was preceded in death by his wife Eleanor, his brother Gary, his sister Luann, his mother Lucille, and his father Theron.

There will be a viewing Saturday at Webb Funeral Home from 1:30-2:30 p.m. prior to the services. Interment will be in the Richmond Cemetery.  In lieu of flowers, Ron requested donations be made to LDS Humanitarian Services.  We wish to express our gratitude to the staff and hospice workers at Jamestown Memory Care who helped care for Ron.  Memories and condolences may be shared with the family at webbmortuary.com

To order memorial trees or send flowers to the family in memory of Ronnie Lorin Lewis, please visit our flower store.