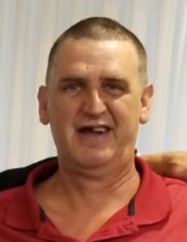 Rondo Lee Crossley, 58, of Preston, Idaho passed away on Decmeber 1, 2018 after a courageous battle with pancreatic cancer. He was born on February 24, 1960 to Rondo Edward Crossley and Argilene Davids in Soda Springs, Idaho. He was their first child together.

Rondo was an easy child who always made people smile because of his sense of humor. In July of 1976, Rondo lost his left leg in a farming accident, through all of the surgeries and long hospital stays he still kept a smile on his face.

He married Teresa Welker in 1979, they had 2 kids together and later divorced. He then married Melissa Kay Crossley on June 25, 2002 and they have 3 kids together. Rondo worked at Preston Products for 26 years before retiring. He had a love for the outdoors and would often go fishing, camping or hiking. He always took pride in his dutch-ovening skills. He was a long time fan of the Dallas Cowboys and always rooted for them. What he loved most was spending time with his family and remaining strong for them while he battled his cancer.

Click the "Red Arrow" to listen to funeral services. You may also order copies by clicking the "Order" button.

To order memorial trees or send flowers to the family in memory of Rondo Lee Crossley, please visit our flower store.