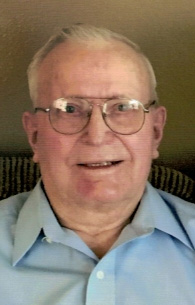 Roland W. Anderson passed away on Thursday, August 1st at the age of 97, one day short of his 98th birthday. Roland W. Anderson was born on August 2, 1921 in Richmond, Utah to Carl Lorenzo and Susie Hope Anderson. He graduated from North Cache High School then served 4 years in the U.S. Army. He married Alice Nuffer on July 23, 1943.They were parents of Brent (deceased), Ronda and Rodney.

He was a successful Building Contractor for over 30 years building and owning homes and apartments throughout Cache Valley. He owned three “Andy's” Drive Inns in the valley for several years. After retiring, three Green Houses were built on his property. Many individuals in the valley benefited from his beautiful flowers and vegetable plants.

Roland always had to be accomplishing something! He began building “Happy Factory” wooden toy cars. Over 107,000 cars were painted, then donated to the Church Humanitarian effort.

He then built over 25 Grandfather Clocks and several Caskets (including his own) to keep him busy. His wood working masterpieces including in-laid tables and thousands of wooden pens are proudly owned by many family members and friends. Any wooden novelty item that was presented to Roland, several were always produced. Roland and Alice served as Ordinance Workers in the Logan Temple for over 11 years. Fishing was a passion for Roland. He enjoyed many fishing adventures near and far including several successful trips to Alaska.

He was preceded in death by his parents, sisters Helen, Melba and Hope, brother-Ivan, and son-Brent.

To order memorial trees or send flowers to the family in memory of Roland William Anderson, please visit our flower store.
Send a Sympathy Card