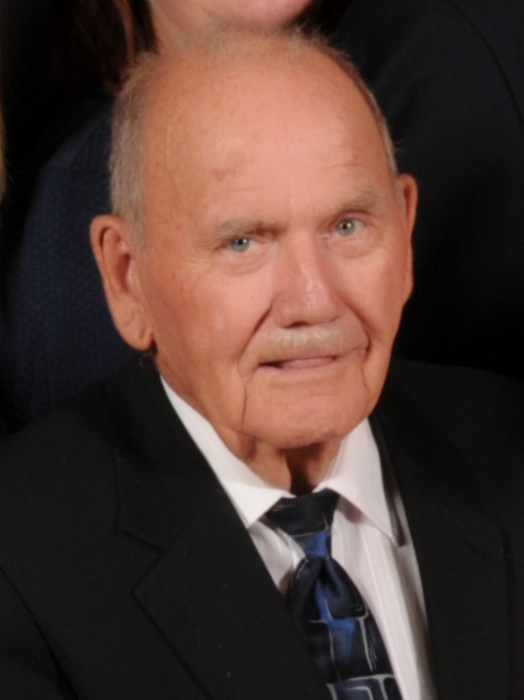 On Friday, November 29, 2019, at his home in Richmond, Utah, Robert (Bob) Jorgensen, passed peacefully into the next life, surrounded by his loving family, who will miss him deeply.  Robert was born to Abraham Darrel Jorgensen and Afton Cook in the small town of Logandale, Nevada and later raised in American Fork, Utah.

He met his eternal companion and soul mate, Janice Sorenson, and they were later married in the Manti temple.  They have walked the journey of life together for over 64 years, meeting the ups and downs with determination, loyalty, courage, and love. Robert had many hobbies and occupations, but his family was his passion. He adored his wife and cherished his children and many grandchildren. We gratefully stand upon his shoulders, striving to carry on the great legacy he has given us.

Robert kept busy in all kinds of ventures utilizing his artistic creativity.  He was a high-quality contractor, building for the Parade of Homes and achieving many distinguished awards for the beautiful and imaginative designs and construction projects he accomplished. He also started the Curb It business for landscape edges, implementing new ideas and techniques to improve the quality of decorative cement curbing.

Robert’s mind was always working and busy, developing ideas of ways to make new things.  He utilized whatever medium was available, from PVC pipe for art projects to palm leaves that were made into deer decorations for Christmas. He became involved in creating wire art decorations of all kinds and paint-dipped canvases. He would play in the snow with his children and grandchildren, inspiring them with his impressive snow sculptures and igloos.

Robert died the day after Thanksgiving, a day remembered by the family when he could be found busily creating parade floats for the Preston Festival of Lights.  All of Preston, Idaho would see his Christmas spirit displayed through  floats, shining brightly with Christmas lights.

In his quiet moments he tended his garden, made his yard a creation of beauty, watched the BYU and Jazz games, and played the game of Hand and Foot with family and friends. Over the years, Robert spent time camping and traveling as well. He would count the “herds of birds and flocks of deer” along with the airplanes traversing the skies. Robert enjoyed buffets, breakfast, peach yogurt, chocolate chip cookies, chocolate donuts, or just chocolate in general.

He was an active member of the LDS Church with a vibrant and fervent testimony of the gospel of Jesus Christ. He had a deep and abiding relationship with his Heavenly Father and Jesus Christ.

Robert led a full life filled with hard work, love, laughter, compassion, and joy.   He will be extremely missed, but his family knows that he will be working on the other side, in the service of the Lord and watching over his family.

We acknowledge with special thanks and gratitude, Monty from Primrose Hospice for his gentle guidance and care of Robert and the family.  We would further like to extend our appreciation to the many friends, ward leaders, and neighbors who have visited and rendered service, gestures of kindness, and support during this challenging time.

To order memorial trees or send flowers to the family in memory of Robert M. Jorgensen, please visit our flower store.
Send a Sympathy Card