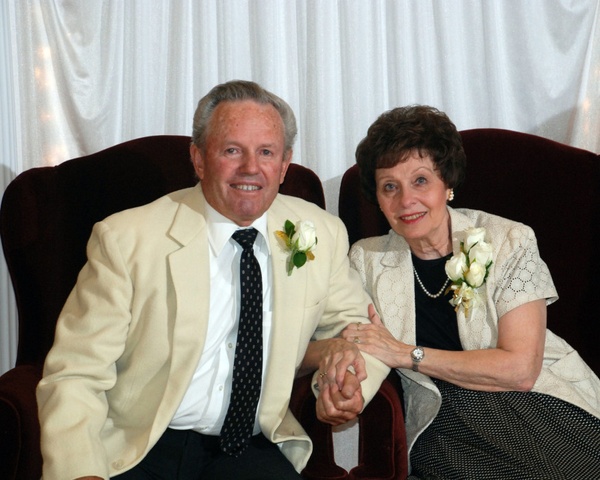 On Thursday, February 23, 2017, Heaven was blessed with two beautiful angels as Robert Horace Haworth and Henriette Hiller Haworth were called home together.

Robert was born March 14, 1931 in Preston, Idaho to Horace Noble Haworth and Ruby Alice Evans.  He was the oldest of four children.  He attended Preston High School where he excelled in basketball and baseball and served as senior class president.  Robert attended Utah State University.  He served in the Southwest Indian, Navajo speaking Mission. Upon returning home he was drafted into the Army and served honorably in the Korean War.

Henriette was born to Walter Wilhelm Hiller and Audrey Jackson on August 24, 1939 in Provo, Utah.  She was the 2nd child of 6. She attended East High in Salt Lake City where she was involved in the acapella choir and marched with the Pep Club.  Though she never attended college she was honored to have graduated from the Logan LDS Institute.

Robert and Henriette met on a blind date and were married June 5, 1957 for time and all eternity in the Salt Lake LDS Temple.   This year would have marked 60 wonderful years of marriage. They made their home in Franklin, Idaho where Robert worked and later purchased from his father, the oldest family owned farm in Idaho, the Merricanna Dairy.  As each child was born, they were surprised and happy to welcome another daughter until seven daughters made their family complete.  The daughters were their pride and joy. They worked alongside their Dad feeding calves, hauling hay, driving machinery and becoming his “favorite right hand men.”  They also worked alongside their mother who taught them to sew, cook, clean and to love their Dad.  They all loved to play softball together, sing around the piano, have family nights, play games, go fishing and on picnics, supported each other in activities, and see “picture shows/movies” in Lewiston.  As daughter’s, a highlight was their Christmas present from Mom and Dad which was always a pretty new dress that Dad had hand-picked with help from Mom as his model.

Robert and Henriette were faithful members of the Church of Jesus Christ of Latter-Day Saints where they served faithfully in various callings. Robert ‘s favorite was serving as Bishop of the Franklin 2nd Ward.   Henriette’s favorites were serving in the Young Women and Primary.  She also spent many hours doing extraction and indexing.  They especially enjoyed making visits to families and friends throughout the Franklin area. They simply loved to serve the Lord.

Robert served in the community -- Preston School Board, Idaho Dairy Commission, Franklin County Hospital Board, and together they served and supported the Bennett Cup and many other events in the Preston Community including being the biggest fans of Preston High School Sports.

When Mom was diagnosed with Multiple Sclerosis, Dad became her number one cheerleader and caregiver.  The love and devotion we watched grow through these years was priceless for all who observed them.

We would like to thank the first responders, the officers and the kind and loving staff at Logan Regional Hospital.

Funeral Services will be held Saturday, March 4, at the Franklin LDS Stake Center, 106 E. Main Street at 12:00pm. A viewing will be held Friday, March 3 from 6-8pm at the Webb Mortuary 1005 S. 800 E. Preston, Idaho and at the church prior to the service 10-11:30am. Interment will be at the Franklin Cemetery.  Memories and condolences may be shared with the family at www.webbmortuary.com

To order memorial trees or send flowers to the family in memory of Robert & Henriette Haworth, please visit our flower store.