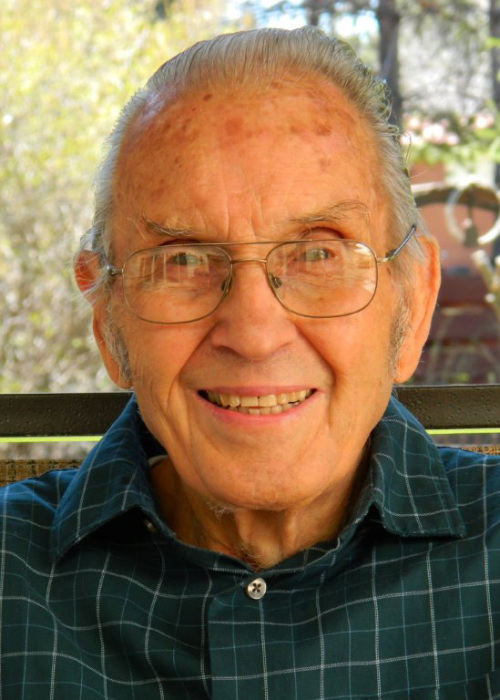 On Thursday, March 28, Robert Noel (Bob) Acock, loving husband and father of two, and "Granddad" to six granddaughters and twelve (almost thirteen) great grandchildren passed away at the age of 92.

Bob was born May 7, 1926, to Russell Floyd and Katie Justina Eilers Acock in Seminole, Oklahoma.  He was the oldest of four children...Wanda, Ila, and Marlo.  When Bob was about four years old, the family moved from Oklahoma to Paul, Idaho, where he grew up learning the hard work of a farm family, and the importance of always being a gentleman.  Bob attended Rupert High School and after graduation in 1944 joined the army and served in the Philippines until his honorable discharge in 1946.  He joined the Phi Kappa Tau fraternity at the University of Idaho in Moscow.  He met the love of his life, Phyllis Schulz, during a friendly snowball fight with the girls' sorority next door.  The rest is history!  Bob and Phyllis were married on another snowy day, December 26, 1948, in Idaho Falls, Idaho.  Bob graduated from U of I with a double major in Ag-Econ and Agronomy.  The young couple moved to Gooding, Idaho, where Bob worked for the Federal Land Bank.  In 1951 he joined Farmers Insurance, and they moved to Preston in 1953.  Bob represented Farmers as District Manager and agent until his retirement in 1996 making many life-long associations and earning many awards along the way.

Bob was always active in the community.  He served as a ruling elder in the Presbyterian Community Church and was Clerk of Session for many years.  He was the longest tenured member of the Lions Club in the State of Idaho where he was both past president and secretary. He was past president and vice-president of the Preston Chamber of Commerce.  He served on the Franklin County Medical Center Board for many years.  He was the chairman of various committees for the University of Idaho. Bob could always be found at least one night each summer during the rodeo working in the Lion's booth or selling tickets.  His little yellow Model A car was a fixture of the Rodeo and Festival of Lights parades for years.

And, Bob loved his ice cream.  The kids all knew they could count on Granddad to suggest they stop someplace and get ice cream.  He was the biggest kid of them all.

Bob loved to garden, antique, refinish old furniture, and to travel.  Bob and Phyllis rarely missed an away game or a cheer competition for one of the granddaughters.   HIs greatest accomplishment was "GrandDad".

Bob's life will be celebrated on Saturday, March 30, @ 11:00 am at the Presbyterian Community Church, 2nd N and 2nd E, Preston, Idaho.  A time of sharing will be immediately follow the service with food  and fellowship.  Memories and condolences may be shared with the family at: webbmortuary.com

In lieu of flowers, memorials may be made to:

To order memorial trees or send flowers to the family in memory of Robert "Bob" Noel Acock, please visit our flower store.
Send a Sympathy Card