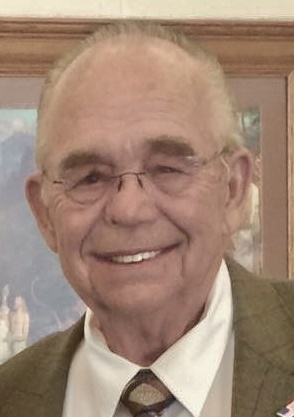 Richard Lorenzo (Dick) Garrett passed away at his home on the morning of March 26, 2019 from conditions incident to age. Dick spent his last week doing the things that he enjoyed most - visiting a newborn great-granddaughter, seeing the baby blessing of another great-granddaughter, attending his granddaughter's wedding, and spending time with his own children. He achieved great-great-grandfather status just before leaving this world. Dick spent his last few days on the road with his good friends, Joe Ward and Reed Smith, hauling cattle.

Dick was born on October 25, 1932 in Logan, Utah to Lorenzo Thomas and Amelia Cronquist Garrett. During his young life the family followed his father as he worked road construction.  They lived in many small towns in Nevada, California, and Utah as his father worked on completing I-80 and other road construction projects. Dick spent a lot of time exploring the desert for turtles, lizards, frogs and also friends.  During one year he had report cards from nine different schools.

Much of his life was spent in Logan, Utah near his grandparents and extended family on their farm. In 1949, his family moved to Preston, Idaho. He was in his Junior year at Preston High School and participated in track, football and baseball. Even though school wasn’t his favorite thing, he went each day because he enjoyed the sports and the life-long friends he made during that time.

In 1951 he graduated from Preston High School and attended Utah State University for one semester, where he played football for a short time.

On June 6, 1952, he married his high school sweetheart, Connie JoAnn Harris, in the Logan Temple of the Church of Jesus Christ of Latter-Day Saints. Dick served his country in the United States Army and was stationed in Germany, France, Washington State, Boise, and Pocatello. After being honorably discharged, he and Connie settled in Preston, Idaho. While living in Preston, Dick and Connie began a family of their own.

After 64 years of marriage, on May 29, 2017 Connie passed away. Dick missed her greatly and would often drive out to visit her grave. His greatest wish since then was to be with her again.

Dick was a hard worker and provided for his family. Throughout his life, he worked as an auto-body technician and dairy farmer, and various other jobs, then retired from Thiokol as a non-destructive x-ray technician. He became good friends with the men in his carpool and spent several hours each week driving to and from Promontory Point for work.

Dick loved the great outdoors- hunting, fishing, and autumn. You could see him driving around Fairview on his ATV almost every day with a pistol or rifle by his side - just in case he saw a coyote. He had a fondness for horses and he looked forward to attending that Famous Preston Night Rodeo every year (all three nights if possible).

Dick was a faithful follower of our Savior, Jesus Christ and was a member of the Church of Jesus Christ of Latter-Day Saints. Most recently, he was an Assistant Ward Clerk. Dick enjoyed researching his family history with Connie and spent many hours of his life serving in the temple. During the last year of his life he concentrated his family history efforts using new technology to catalogue the mountain of family pictures and stories in his care.

Dick was preceded in death by his sister (Sharroll), his parents, a son-in law (Garth B. Christensen), a grandson (Corey James Mendenhall), and a great-grandson (Tyler Gordon Cram).  He is survived by his children, Jan (Garth) Christensen of Preston, Idaho, Doug (Susan) Garrett of Kemmerer, Wyoming and Sid (Jill) Garrett of Idaho Falls, Idaho.  He is the grandfather of 13 beloved grandchildren, 26 great-grandchildren, and one great-great grandchild, all of whom were teased and adored by Grandpa Dick.

Funeral services will be held Tuesday, April 2 at 11:00 in the Fairview meetinghouse of the Church of Jesus Christ of Latter-Day Saints. There will be a viewing Monday evening from 6:00 PM to 8:00 PM at Webb Funeral Home, and Tuesday from 9:30 AM - 10:30 AM in Fairview.

To order memorial trees or send flowers to the family in memory of Richard "Dick" Lorenzo Garrett, please visit our flower store.