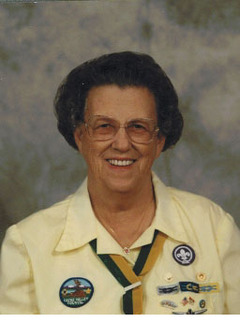 Revola Jaussi Hobbs, age 94, passed away peacefully in Preston, Idaho on July 9, 2016 surrounded by her family.  She was born September 11, 1921 to John and Estella Jaussi in Paris, Idaho.  Revola married Roland Wilcox Hobbs, December 20, 1944 in the Logan LDS Temple  and together they had six children, Dennis, Carolyn, Donna, Randy, Maxine and Mark.

Revola & Roland had over 58 happy years together before he passed away on March 10, 2003.They lived on the family farm in Linrose, Idaho for 31 years before moving to Preston, Idaho in 1975.  She was involved in community organizations, 4H and Kiwanis, of which she was a life Time Member.  She served many years in Cub Scouting, and received her Silver Beaver award.  She was a faithful member of the Church of Jesus Christ of Latter Day Saints and served faithfully in many callings.

The family would like to thank Dr Lynn Eskelson, Dr Stuart Knapp and staff, along with the staff at the Franklin County Memorial Hospital and Franklin County Home Healthcare nursing staff.

To order memorial trees or send flowers to the family in memory of Revola Hobbs, please visit our flower store.