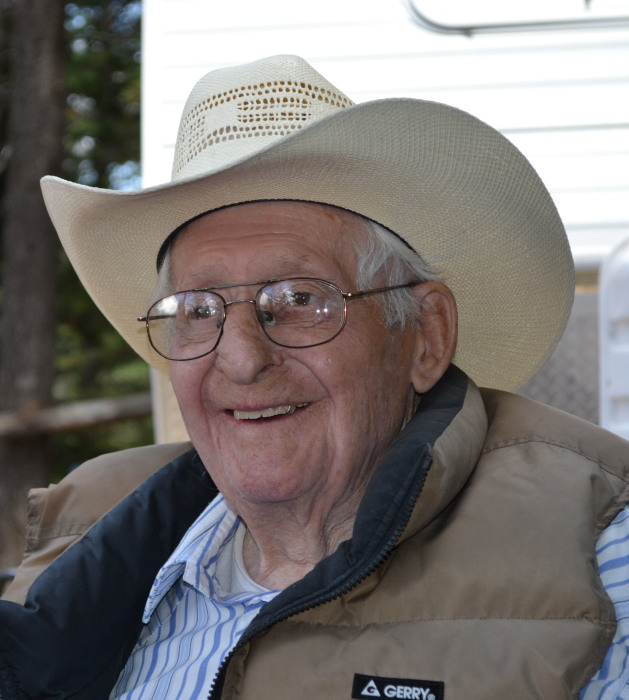 “Everyday is a holiday, or a hell of a day!”

Reed H. Henderson passed away on June 6th, 2017 at the George E. Wahlen Veterans Home in Ogden, Utah.  He was the third of eight children, born to Millie Pratt and Hyrum Lester Henderson, on October 23rd, 1922 in Swan Lake, Idaho.

He spent his childhood with his family on the farm learning the value of hard work.  He spent many summers with his older brother Don, tending the cattle and crops in Cottonwood.  Cottonwood became a place of cherished memories, where he loved to fish, hunt and camp.  He shared his love of Cottonwood with his family through his stories of his youth.

In 1944, Reed was drafted into the army to serve his country during World War II. Because of the skills acquired in his youth, he became an expert rifleman in the military.   While serving in France, a hand grenade was thrown into the foxhole were Reed and other soldiers were taking cover.  Thinking quickly Reed grabbed the grenade, threw it, and saved the lives of everyone in that foxhole.  In that selfless act, Reed lost his left hand. For his valiant service in the military he received a Purple Heart and the Silver Star.

Reed never let the loss of a hand stop him from doing what he wanted.  With a hook on his left arm, he found buttoning shirts and tying shoes a challenge, so he solved that by wearing shirts with snaps and cowboys boots.  He was the best dutch-oven cook around and his hook came in handy to remove the hot dutch ovens from the fire.  He delighted in telling others they were handicapped because they didn’t have a built in hook like his.

While recuperating at Bushnell Army Hospital in Brigham City, Utah, he met a cute little gal from Malad and a year later they were married.  Reed married Jadine Rice on June 10th, 1947, in Elko, Nevada.  They were blessed with two children.  To support his young family, he became an Idaho State Brand Inspector serving cattlemen all over southeastern Idaho.  He retired in 1985 after 35 years of service.  Reed and Jadine had a great life together for 46 years, until her death in 1993.

Reed had such a great life with one gal from Malad, he found himself another one, and married Lela (Daniels) Blaisdell in 1995.  They loved to travel and do things together and spent their time between her home in Malad and his in Preston until it became too much for them.

A special thanks to the staff at Williamsburg, in Logan, and the V.A., in Ogden, for putting up with Reed’s teasing, jokes, and stubbornness.  We appreciate the tender care that was given to Reed the last four years.

To order memorial trees or send flowers to the family in memory of Reed H. Henderson, please visit our flower store.
Send a Sympathy Card