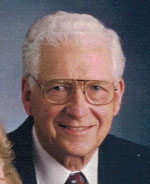 Our loving husband and father, Phill H. Goodsell, of Salt Lake City, Utah passed away peacefully on Tuesday, April 25, 2017, at his daughter's home in Grace, Idaho. He was 89 years old. Although he suffered from Lewy Body Dementia in recent years and had difficulty communicating, he remained aware and positive, and maintained a sense of humor, often surprising us with a one-liner. Phill will always be remembered as a kind, gentle, soft-spoken, and wise man, always thoughtful and caring of others, especially family.

Phill was born September 27, 1927, in the small town of Weston, Idaho to Albert and Annie Hoopes Goodsell. He was the youngest of twelve children and was adored by his siblings. In 1945 he joined the Army and was stationed in Iceland shortly before the war ended. After the war he returned home and resumed courting his future wife, Joy Dahle, and they were married September 3, 1948, in the Salt Lake Temple. They moved to Logan, Utah where Phill attended the Utah Agricultural College (now Utah State University) and graduated in 1952 with a degree in Agronomy. Upon graduation he obtained employment with the U.S. Bureau of Reclamation where he worked for 39 years.

In 1958 Phill was transferred to Boise, Idaho. Here, with his wife Joy, they raised their family of eight children, all of whom graduated from Borah High School. Phill and Joy were active members of the LDS Church, and Phill served as Bishop of the Boise 7th Ward from 1966-1971.

After Phill retired in 1989, he and Joy moved to Provo, Utah to be closer to family and his beloved BYU Cougars. He enjoyed gardening and always had the best garden in the neighborhood. In 2011, Phill and Joy moved to Logan, Utah then to an assisted living center in Salt Lake City in 2015.

To order memorial trees or send flowers to the family in memory of Phill Hoopes Goodsell, please visit our flower store.
Send a Sympathy Card