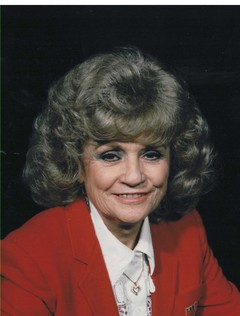 Pauline Lowe Waddoups Anderson, 86, wife, mother, grandmother and sister, passed out of this mortal life into eternity on March 26, 2016.  Her great hope was to once again see her father, Rulon Kingsford Lowe and her mother, Nelda Blair Lowe.  She was born Nov. 24, 1929 in Lewiston, Utah.

She grew up in Lewiston, Utah attending local schools and graduating from North Cache High School.  On July 27, 1948, she married Dale Waddoups in the Logan Utah Temple.  They had one daughter, Marcia.  Dale and Pauline lived many years in Franklin, Idaho where they owned a mink farm.  She was always a hard worker, caring for her home and child and doing much of the heavy labor involved in raising mink.

After Dale died in 1990, Pauline married Robert Anderson on Nov. 24, 1995.  They made their home in Preston, Idaho.  Bob cared for their yard and orchard and Pauline kept a spotless house and had a lavishing affection on a series of beloved dogs.  Together they enjoyed many RV and fishing trips, loving the beauties of the outdoors and visiting family.

She is survived by her husband, Bob; by a daughter, Marcia Patterson; a granddaughter, Angie Cryer; a sister, Bonna Ralphs; a brother, Gary (Adelle) Lowe and by many nieces and nephews.

A special thanks to the doctors and caregivers at the Franklin County Medical Center who cared for her so patiently during her final illness.

Funeral services will be held on Friday, April 1, 2016 at noon at Webb Funeral Home, 1005 South 800 East, Preston, Idaho.  A visitation will be held on Friday from 10:30-11:30 a.m. at the mortuary.  Interment will be in the Lewiston, Utah Cemetery.  Memories and condolences may be shared with the family at www.webbmortuary.com

To order memorial trees or send flowers to the family in memory of Pauline Waddoups Anderson, please visit our flower store.
Send a Sympathy Card