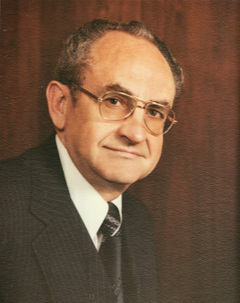 Orlin Charles “Chuck” Munns, beloved husband, father, grandfather, and great-grandfather, passed away peacefully in his home in Waterford, California on May 28, 2016, at age 93. He was born November 3, 1922 on the family farm in the small rural community of Elwood, Utah, one of 12 children. He grew up learning the value of hard work, working with his family on the farm during the years of the Great Depression.

He graduated from Bear River High School in 1940 and after a year of college, drove to Southern California on vacation and decided to stay. It was there he met and fell in love with his future wife, Opalgene Rawson, but their courtship was interrupted by the outbreak of World War II.  He enlisted in the U.S. Army Air Corps. He was assigned as the navigator on the crew of a B-24 bomber with the 8th Air Force 448th Heavy Bombardment Group, stationed in Norwich, England. He flew 30 missions over Europe, and was awarded the Distinguished Flying Cross, the Air Medal with three oak leaf clusters, the European Campaign with four battle stars, among other honors, reaching the rank of Captain. On December 18, 1944, he and Opalgene were married in the Salt Lake City, Utah temple. He returned to combat duty with the outbreak of the Korean conflict, as navigator of the first B-29 bomber to enter the conflict in Korea. After 29 missions as squadron navigator, he returned to peacetime duty, achieving the rank of Major before resigning from the Air Force and returning to civilian life. He entered Loyola Law School, graduating in 1960 and had a long and successful career as a corporate attorney in Pasadena, California, before retiring to Oakdale, California in 1986.

During his years in Oakdale he developed, owned and managed industrial properties and developed residential real estate.  He was a dedicated member of the Church of Jesus Christ of Latter-day Saints, serving for many years in many leadership positions including bishop of the South Pasadena and San Marino Wards, president of the Pasadena California Stake, as well as president of the Oakland California Temple.

He is survived by his loving wife and companion of 72 years, Opalgene, four children: Jay C. Munns (Cheryl), Marianne Lavine (Doug), Patricia Shepherd (Dennis), Virginia Munns, 17 grandchildren, and 26 great grandchildren. He was preceded in death by his parents, and his youngest son David Munns.

Funeral will be held on Thursday June 9 at 1:00 p.m. at Webb Funeral Home in Preston Idaho. A visitation will be held Thursday from 11:30 a.m. - 12:30 p.m. at the funeral home. Interment will be in the Whitney, Idaho cemetery.  A local memorial service will take place on June 18 from 2:00 p.m. -  4:00 p.m. at the Church of Jesus Christ of Latter-day Saints, 1111 East A Street in Oakdale CA. Memories and condolences may be shared with the family at www.webbmortuary.com

To order memorial trees or send flowers to the family in memory of Orlin Charles Munns, please visit our flower store.