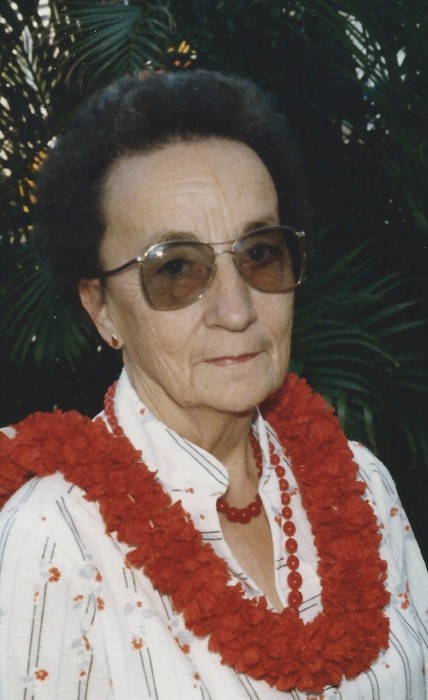 Our Mother, Grandma and friend Ora Rasmussen passed on September 4, 2016 and was reunited with those who have gone before her.  She was born August 4, 1920 in Cleveland, Idaho at the old homestead.  She was 8th of 10 children born to Edgar and Catherine Nielson.

Her father passed away when she was only 6 years old leaving her and her sisters and brothers to manage the farm in Cleveland.  She attended school at Cleveland and was always excited to share stories about her high school years.  At the age of 19, she married Felix Smout Jr. in the Logan Temple in 1939.  Felix and Ora had two children, Bruce and Kathy.  In 1946, Felix passed away leaving her to raise the children.  A young man just returning from the Korean War was able to catch the heart of Ora.  Ora and Ted Rasmussen were married March 25, 1950.  Their marriage was later solemnized in the Logan Temple.  Ted and Ora enjoyed fishing, traveling through the United States, spending their winters in Arizona and most of all spending time with their family.    Ted and Ora were blessed with one more son Vaughn, 10 grandchildren, 15 great grandchildren, 2 great grandchildren.

Ora was an excellent homemaker with a strong work ethic.  She was determined to share that ethic with her children.  She was a member of the LDS Church and was one of the first Den Mothers in Cub Scouting in the Preston area.  She worked at Kings and JC Penny for many years and enjoyed her friendship with those she worked with.  Ora was known throughout the valley for her beautiful crocheting and knitting.

She is survived by her son Vaughn (Helen) Rasmussen of Georgetown, Idaho, her son in law Wade Dursteler, Preston, Sister in law Beth Nielson, Idaho Falls and her grandchildren.  She was preceded in death by her husband Felix and Ted, Son Bruce Smout, Daughter Kathy Dursteler, and 6 brothers and 3 sisters.

The Rasmussen and the Dursteler families would like to offer a very special thank you to all who offered any form of kindness to Ora.  Also a very special thanks to those at the Franklin County Transitional Care Center in Preston, Idaho which was Ora’s home away for home, and she grew to love those people.

Funeral service will be held on Monday, Sept 12, 2016 at noon at Webb Funeral Home, 1005 South 800 East, Preston, Idaho.  Friends may call Monday from 10:30 to 11:30 a.m. at Webb Funeral Home.  Interment will be in the Preston Cemetery.  Memories and condolences may be shared with family at www.webbmortuary.com.

To order memorial trees or send flowers to the family in memory of Ora Rasmussen, please visit our flower store.
Send a Sympathy Card