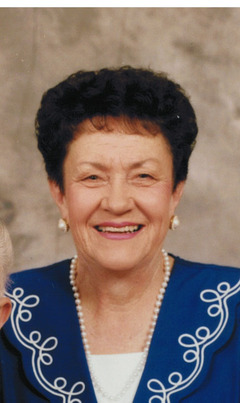 Oxford, Idaho – Nellie B. Perkins Boyce, 84, passed away peacefully with her loving husband by her side Monday, September 28, 2015, at the Franklin County Transitional Care Center in Preston, Idaho.

She was born August 06, 1931 in Preston, Idaho, the daughter of Joseph M. and Nellie Bell Perkins.  She Married James D. Boyce on July 25, 1949, in Preston, Idaho; and later solemnized in the Logan LDS Temple.

Nellie was active in the LDS Church all of her life and held many positions and enjoyed being a Primary and Young Woman President, served on the several Stake Boards.  White in Pocatello she served as the school PTA President and along with her husband, Dee, on school advisory committees.  Nellie loved to travel with her companion, Dee,  and did so all across the US.  Together they had an enjoyable time dancing and served as dance instructors several different times.  Nellie always enjoyed pretty flowers and a garden.  She was always sewing clothing, drapes, and various household items for her family.  Many of her family have received one or more of her handwritten letter over her lifetime. They are cherished because she had such beautiful penmanship and good counsel.  Where ever they moved, Nellie would always be quick to meet and make new friendships.

She is preceded in death by her parents, Joseph and Nellie Perkins, two sisters, Alice Marler and Thelma Griffeth, two brothers, Paul B. Perkins and Ray B. Perkins, five half-brothers and three half-sisters, a grandson, Calahan Boyce and a granddaughter Shakira Waldron.

To order memorial trees or send flowers to the family in memory of Nellie B. Boyce, please visit our flower store.
Send a Sympathy Card