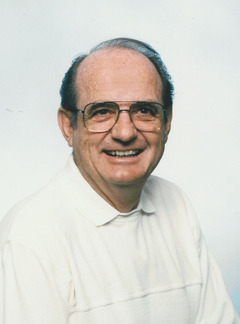 Milton W. Liechty passed away peacefully in his sleep with his wife by his side on Tuesday, April 12, 2016 at the age of 88.  He was born January 10, 1928, to Walter and Hilda Liechty in Providence, Utah.

Milt’s family was his life.  He especially loved spending time with his grandchildren and great grandchildren.  Whenever he wasn’t outside he would be in his shop with his grandchildren letting them paint their wood creations or screw in screws or hammer in nails.  They did it all with grandpa.  Milt was an awesome cook.  His BBQ steak & eggs, his bread, his meatballs, his cookies, caramels and pickled eggs were the world’s best.  Everyone loved when it was Dad’s day to cook.

Milt was raised in Providence, Utah and graduated from South Cache High School.  He attended Utah State University.  In 1966, he married the love of his life, Marilyn Harris.  They were later sealed together for time and all eternity in the Logan Utah Temple. Between the two of them, they had six children:  Stacey, Kris, JR (Gayle), Mark (CoraLee), Terry and Teresa (Wade).

Milt took great pride in serving his country.  He served in the Civil Air Patrol, US Army and Navy Reserves and the Utah National Guard as the First Lieutenant Battery Commander.  His professional life was centered on hard work, honesty and integrity.  He was service manager for Sears Roebuck and Co. in Logan, Utah for 8 years.  He then went on to work at Mountain Fuel Supply and retired as manager of the South Salt Lake division after 27 years.  He loved his neighbors and community, holding several callings in his church as well as serving as President of the Preston City Council for 8 years.

Milt touched countless people’s lives during his 88 years on Earth.  He was the best husband, father, grandfather and friend that anyone could ask for and will be greatly missed by all those who knew and loved him.  We love you until we meet again.

Funeral services will be held on Saturday, April 16, 2016 at noon at Webb Funeral Home, 1005 South 800 East, Preston, Idaho. Friends may call Saturday from 10:30-11:30 a.m. at Webb Funeral Home.  Military rites and interment will be in the Providence, Utah Cemetery.  Memories and condolences may be shared with the family at www.webbmortuary.com

To order memorial trees or send flowers to the family in memory of Milton W. Liechty, please visit our flower store.