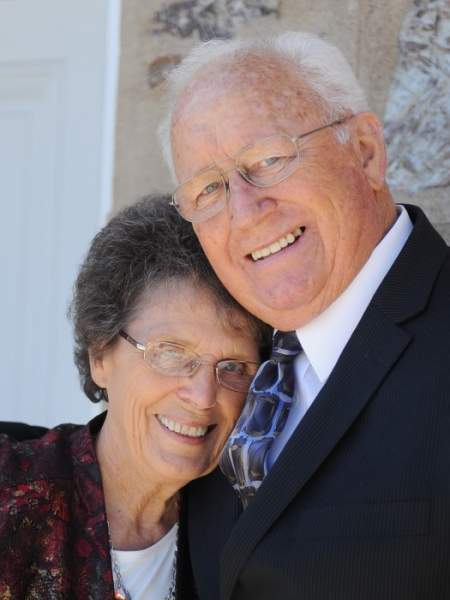 Max was born December 29th, 1934 in Smithfield, Cache County, Utah, to Alma Pascoe Richards and Nora Peterson. He spent his childhood living with his family and attended schools in Smithfield. Max served in the Navy during the Korean War where he learned the trade of a welder.

Phyllis was born June 25, 1937 in Preston, ID to Gladys Woodward and Darrel LeFevre. As a child she lived in Franklin and attended schools in Franklin and Preston. She attended Utah State University in Logan, UT.

Max and Phyllis were married on July 23rd, 1959 in the Logan LDS Temple. They lived most of their married lives in Franklin where they raised their three daughters. They also lived in Riverton, UT and Lewiston, UT where they worked for Ritewood and Oakdell Egg Farms.

They both were very active members of the LDS Church. Max served in many leadership positions including serving as a Bishop in Lewiston, UT. Phyllis served faithfully in many callings within the Relief Society and Primary. Together they served in the Logan Temple. A highlight of their lives were the years they spent serving as missionaries in the Mongolia, Ulaanbaatar mission.

Max was preceded in death by his father and mother, and by his sister Sandra. He is survived by his brother Ted Richards of Bountiful, UT, and his sister Patricia Christensen of Monticello, UT.

Phyllis was preceded in death by her father and mother, her brother John, and her sisters Renee and Carol. She is survived by her brother Cecil LeFevre (Judy) of Preston, and sisters Anna Godfrey of Smithfield, Donna Redington (Billy) of Brigham City, and Marion Shumway (Nick) of Franklin.

Funeral services will be held Monday, April 30th, 2018, at 11:00 am, at the Franklin LDS Stake Center located at 106 East Main Street Franklin, Idaho. Friends and relatives may attend a viewing held earlier the same day at the same location from 9:30 am to 10:30 am. A viewing will also be held on Sunday, April 29th, from 6:00 pm to 8:00 pm at Webb Funeral Home located at 1005 South 800 East, Preston, Idaho. A short graveside service with be held at 2:30 pm at the Smithfield City Cemetery located at 300 E Center St. Smithfield, UT, where they will be interred.  Memories and condolences may be shared with the family at www.webbmortuary.com

To order memorial trees or send flowers to the family in memory of Max & Phyllis Richards, please visit our flower store.