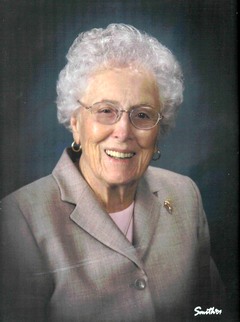 Mary Price Behunin of Provo, Utah, died Friday, January 29, 2016, after a short stay at Stonehenge Care Facility, in American Fork, Utah. She was 97 years old. Mary was born June 8, 1918, in Samaria, Idaho, to John Morse Price and Ruth Williams Price, and had 4 brothers and 8 sisters. She grew up in Samaria and attended school there through the eighth grade. To attend high school, she stayed in Malad with her older sister, Ruth Price Powell, and when Ruth and her husband married and moved to Twin Falls, Idaho, Mary moved with them, and where she graduated from Twin Falls High School in 1936. She later attended business school and completed a secretary course in Los Angeles, California, before moving to Oakland, California to begin her career. There, she was introduced to Oral Aaron Behunin, at church, by his sisters. Falling in love, they married, October 2, 1942, and were later sealed for time and eternity in the Oakland Temple on August 19, 1972. When Oral volunteered for service in the U.S. Army Signal Corps (during World War II), Mary followed Oral to Joplin, Missouri and Chicago, Illinois for his communications training, and where Mary worked as a secretary. When Oral was deployed to Europe, Mary returned to Oakland and helped cared for Oral’s mother. After helping to establish communications for the Potsdam Conference, aka, the Berlin Conference of the Three Heads of Government of the USSR, USA and UK (17 July to 2 August 1945),  Oral returned to his career with Western Electric (AT&T), in Oakland. When transferred to Lodi, California, in 1950, they bought a home and raised their children there. Oral died August 23, 1991, and in 1992 Mary bought a home and moved to Provo, Utah, where, with the help of her son, Stephen, Mary was able to stay until five days before she passed away. Mary is survived by three children and family: Mary Margaret Behunin Haley and her husband Preston Haley, Rexburg, Idaho; Stephen Oral Behunin, Provo, Utah; Carolyn Ruth Behunin; 12 grandchildren; 36 great-grandchildren; and her sister and brother-in-law Edith (Patsy) and Khalil Scott of Malad, Idaho. Funeral services will be 10:00 AM, Monday, February 15, 2016, at the Pleasant View 7th Ward building, 2445 North 650 East, Provo, Utah. The family will receive relatives and friends from 9:00 AM to 9:45 AM at the church. Mary will be buried next to her husband following the services, in the Clifton, Idaho Cemetery at approximately 3:00 PM.  The family expresses thanks to Mary’s friends, family, neighbors, and her excellent healthcare providers of Canyon Hospice. Memories and condolences may be shared with the family at: www.webbmortuary.com

To order memorial trees or send flowers to the family in memory of Mary Behunin, please visit our flower store.
Send a Sympathy Card