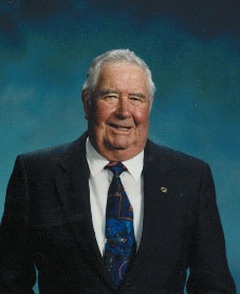 Marion Olson, 93, passed away Thursday, February 4, 2016 at Whispering Pines Care Center in Downey, Idaho of natural causes. He was born on June 10, 1922 in Oxford, Idaho to Ernest Alexander and Clara Alzina Hatch Olson. He was raised in Oxford. As a child he was taught to work hard and take responsibility for his actions. He graduated from Downey High School where he was on the basketball team and developed the skill of dancing the "jitter bug."

During World War II he enlisted in the US Navy and served for three years in the South Pacific on the USS Maryland. After his first year of service, while home on leave, he married his sweetheart Bessie Ruth Mendenhall on April 7, 1944. Their marriage was later solemnized in the Logan LDS Temple. They enjoyed 59 years together working, traveling, and supporting their family.

After returning from the war he worked for the Union Pacific Railroad for 41 years while also running his dairy farm. He was a member of the Church of Jesus Christ of Latter-day Saints and fulfilled various church callings throughout the years. His favorite calling was that of a dance director and performing in many Gold and Green Balls.

He has given many hours of service to his family and community. He was the Mayor of Oxford, President of the Clifton Lions Club, and the best grandpa a kid could ask for. He enjoyed hunting and caring for his yard, and supporting  West Side High School sporting events. He will be remembered for his friendliness and his willingness to help anyone in need.

Funeral services will be held Wednesday, February 10, 2016 at 12:00 noon in the Clifton 2nd Ward LDS Chapel. A viewing will be held on Tuesday from 6-8 p.m. at Webb Funeral Home and Wednesday from 10:30-11:30 a.m. at the church in Clifton. Interment will be in the Oxford Cemetery. Memories and condolences may be shared with the family at www.webbmortuary.com.

The family would like to thank Lana for all the hours she spent caring for dad, the staff at Whispering Pines Care Center, and Hospice nurses Kim and JoAnn for the kindness they shoed to Dad. We will be forever grateful.

Marion will be greatly missed but never forgotten by all who knew and loved him.

To order memorial trees or send flowers to the family in memory of Marion Olson, please visit our flower store.