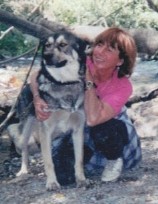 On Thursday, August 1, 2019, Patty Mandel Griffin, 77, went to what she always called her sunny meadow in the sky, with pine trees all around, a creek, wildflowers and all of her loved ones waiting. She was born in wartime Germany on October 1, 1941, the youngest of three daughters to Wilhelm and Selma Blaschke Mandel. The family later fled from occupying Russians and ended up in Bavaria. There were endless forests, and medieval fortresses, a kid's fairytale.

Patty eventually married a GI whose family hailed from Newton, Utah - Ralph Griffin. They came to this country in 1961 with baby Lori. After two years in Missouri where their son Jim was born, the family moved to Alaska on orders from Uncle Sam. Later, in 1965 they settles in beautiful Cache Valley.

Patty raised quarter horses for many years. She rodeoed (barrel raced), cutter raced, and rode in the hills - her personal "God's Country" - moving cows and loving every moment.

Her marriage later ended and she went to work in the Preston Nursing Home for 16 years. She loved and doted on those folks living there and made many friends. She started taking in many stray dogs and various other animals and was always surrounded by them. Her happiest times were when riding a good horse in the hills helping to move cows or being home with her dogs.

She was preceded in death by her parents, a sister, and a son James in 2005. She is survived by a daughter Lori (Dan) of Preston, and four grandchildren Loni (Josh) Ford, or Oroville, CA; Cody (Jess) Wanner of Preston, Tyrell (Kylie) McNeely of Preston, and Kasey Griffin of South Jordan UT.

We know that she would liketo be remembered for her love of all God's creations, nature, animals, and her friends including Dr Beckstead, and Dr Sliesoraitis and all that is kind an beautiful and everyone that impacted her life. She will be missed by all that knew her.

Graveside services and a celebration of her life will be held at a future date.

To order memorial trees or send flowers to the family in memory of Marianne Patricia "Patty" Griffin, please visit our flower store.
Send a Sympathy Card