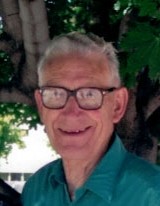 Lynn Frank Olsen, 92, passed away peacefully Monday, July 3, 2017 at the Franklin County Medical Center in Preston, Idaho. He was born on December 26, 1924 in Preston, Idaho to Dewey Strigham and Louise Salome Kunzler Olsen. He graduated from Moreland Idaho High School an dattended what was then the Southern Branch of the University of Idaho, at Pocatello, idaho. In the spring in 1943, during World War II he moved to California to work for a Bee Keeper, who was associated with his father's bee keeping business in Preston. He married Beth Christiansen on December 1, 1943 in the Logan LDS Temple. Upon marriage, Lynn and Beth made their home in Cottonwood, California.

In the early 1950's, not having graduated from college, Lynn enrolled in correspondence courses and prepared to work in Radio and Television Engineering. Employment with a small growing company took them to Redding, Fresno, San Francisco, back to Redding and to Eureka, California. Lynn was loaned from his parent company and worked as Director of Operation for Shipstad's and Johnson's Ice Follies of San Francisco for four years. Later, on loan again he flew the company airplane out of Redding for a construction company. he retired as General Manager of KVIQ TV in Eureka California.

Lynn was always active in the LDS Church. Over the years he served as a Teacher, Branch President, Presiding Elder, High Counselor, Bishop, Counselor to Stake Presidents in Redding, Fresno, San Francisco and as  Stake President of the Eureka California Stake. After retirement he and Beth filled a couples mission in New Zealand and served nearly 10 years in the Logan Temple.

He is survived by his children Dale (Mary) Olsen, of Cove, UT; Louise Jones of Kansas City, KS; Lois (Robert) Booth, of Clovis, CA; and Helen Seibold, of Pocatello, ID; and 20 grandchildren. he is also survived by his siblings James Olsen, Mary Stande, Beth Olson, Barbara Vaterlaus, Ruth Melling, and John Olsen. He was preceded in by his parents, his wife Beth, grandchildren David Olsen, Roberta Booth Loosli, Andrea Siebold, and Travis Siebold and siblings Richard Olsen and Catherine Simpson.

Funeral services will be held on Thursday, July 20, 2017 at 11:00 a.m. in the Preston South Stake Center, 55 East 100 South in Preston.  A viewing will be held on Thursday from 9:30-10:30 a.m. at the stake center. Interment will be in the Moreland, Idaho Cemetery. Memories and condolences may be shared with the family at www.webbmortuary.com

To order memorial trees or send flowers to the family in memory of Lynn Frank Olsen, please visit our flower store.
Send a Sympathy Card