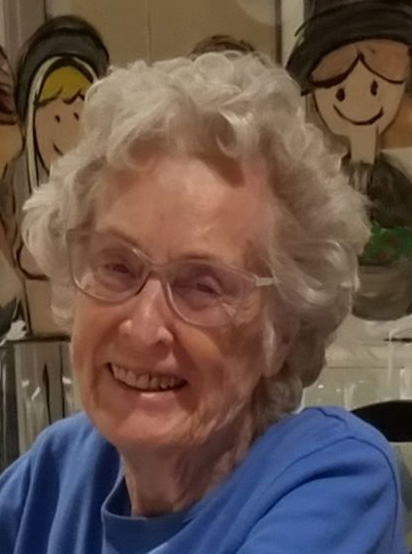 On May 28, 2020, Lucy Carroll Larson Meek passed away in Bountiful, Utah. Lucy was born on May 15, 1931, to Harold B. Larson and Minnie Viola Cutler in Preston, Idaho. Lucy ‘Lue’ Larson spent her youth in Preston, growing up with her older brother Eugene, participating in musical theater, and giving vocal performances until she graduated from Preston High School in 1949. After graduation, Lucy attended Utah State University, where she joined the Sigma Kappa sorority and continued to develop her musical talents, participating in several operettas. After graduation with a degree in Home Economics in 1953, Lucy began her life's passion for teaching in Grantsville, Utah.

On May 28, 1954, Lucy married her sweetheart Richard Bishop Meek in the Logan Temple of the Church of Jesus Christ of Latter-day Saints. Marriage brought a new kind of teaching into her life, with the raising of their six children: Carl, Reed, Kristen, David, Cynthia, and Earl. Shortly after their marriage, Lucy and Richard moved to Chicago, Illinois, where Richard attended dental school at Northwestern University. During their time in Chicago, Lucy continued to teach until they welcomed their first two sons, Carl, in 1955 and Reed in 1957. With each of her children's birth's Lucy made the pilgrimage to her birthplace of Preston, Idaho. Here she had the love and support of her family and the able hands of her uncle Dr. Orvid Cutler, who delivered each of her children.

Upon the completion of dental school, Lucy and Richard moved their young family to Grace, Idaho, to begin Richard’s dental practice. During this time, they further expanded their family, welcoming Kristen in 1959 and David in 1962. In 1963, new changes were on the horizon, and the family made their way to Southern California. Richard continued his education, earning his MS degree in orthodontics from the University of Southern California, while Lucy, the devoted wife, mother, and homemaker, continued to raise their young family. 1967 proved to be an exciting year for the family. Their second daughter Cynthia was born, and with the completion of Richard’s studies, the family was ready to return and build their forever home in their beloved Pocatello, Idaho. With the birth of Earl in 1969, their family was at last complete.

Lucy and Richard raised their family to love the outdoors as much as they did. Avid skiers themselves, many winter days were spent skiing with the children. In the warmer months, camping, hiking, and picnicking were commonplace activities. They loved enjoying all of the beauties that Southeast Idaho has to offer, but also expanded their adventuring into the nearby attractions of the Northwest. Some of these favorites include Yellowstone National Park, the Teton Mountain range, and the Salmon River country.

Lucy’s love of the gospel was ever-present in her and her children's lives. She raised them all to love their Savior and Heavenly Father, and she was a perfect example of Heavenly Mother's love. Lucy served her entire life in the church community. Her musical skills did not go to waste, and she shared these talents by playing the organ and piano and leading music in church callings. She taught her children to love music, teaching her children, some grandchildren, and great-grandchildren to play the piano.

Lucy lived her life in the service of others. For many of her later years, she served as the primary caregiver for her dear mother, husband, and son. Her presence will be greatly missed by those who love her. Lucy is preceded in death by her beloved husband Richard, son Earl, brother Eugene, and granddaughter Catherine. Her legacy lives on in her surviving children Carl, Reed, Kristen, David, and Cynthia, 18 grandchildren, and 32 great-grandchildren.

Funeral  services will be held on Wednesday, June 3, 2020 at 12:00 pm at the Riverdale Chapel , 3562 North 1600 East Riverdale, Idaho. A viewing will be held prior to the funeral at the church from 10:30-11:30 a.m. Interment will be in the Riverdale Cemetery. Memories and condolences may be shared with the family at: webbmortuary.com

To order memorial trees or send flowers to the family in memory of Lucy Carroll Meek, please visit our flower store.
Send a Sympathy Card