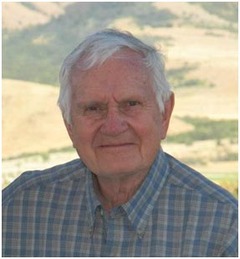 He was born April 7, 1937 in Idaho Falls, Idaho. He was the son of John Fanning Brown, Geneva Fox Brown, and loving stepmother Pearl Bishop Brown.

After graduating from Idaho Falls High School he joined the Air Force and was stationed in California, where he met the love of his life, Lillian Novella Ford. They were married May 12, 1962 in California and later were sealed for time and eternity in the Idaho Falls Temple on May 25, 1976.  They moved to Idaho Falls in 1971 and then to Preston in 2004. Their children are John & Sally Brown, Tonia Brown, and Sondra & Ken Thornley; grandchildren Vaughan & Jo Brown, Khyleigh Brown, Zak Thornley and Alex Thornley

He worked at the INEEL Chem Plant (INL) in Arco for 17 years. He loved his family time, yard work, traveling, biking, playing Skipbo and fixin’ stuff.

He is survived by his wife, children, grandchildren, brothers, Frank, and Jack.
He was preceded in death by his father, mother, stepmother; sister, Florence Wadsworth; Brother, William “Bill” Brown.

Funeral services will be held on Saturday, August 15, 2015 at 11:00 a.m. in the Preston Fifth Ward Chapel, 213 S. 200 E., Preston with Bishop Kevin Ostler conducting.  Friends may call Friday from 6-8 p.m. at Webb Funeral Home, 1005 South 800 East, Preston and Saturday from 9:30-10:30 a.m. at the church.  Military rites and interment will be in the Smithfield, Utah Cemetery.  Memories and condolences may be shared with the family at www.webbmortuary.com

To order memorial trees or send flowers to the family in memory of Louis Dale Brown, please visit our flower store.
Send a Sympathy Card