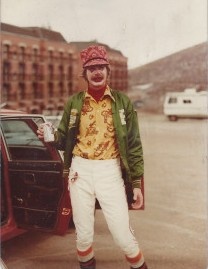 Lew “Butch” Sadleir, born August 7th, 1949, passed away peacefully on November 14th, 2018. He lived life by his own terms. He enjoyed nature and making jewelry.  He grew up in Salt Lake City and later moved to Park City where he worked as a jeweler at The Family Jewels. Perhaps not as well-known was his love of skiing. In his younger years he skied primarily at Park City and Deer Valley resorts. He skied with the famous Stein Erickson at Deer Valley. He was generous to his core and loved to share his good fortune with others. He was also a bull rider in his younger years and got on many big bulls in countless rodeos. He even had a stint as a stunt man in a couple of well-known westerns that were filmed near the town of Pinedale, WY. After retiring, he moved to Preston Idaho where he spent the rest of his days. He loved the outdoors and spent time panning for gold in the beautiful mountains and valleys of Franklin County. Later in life he taught many of the locals how to make jewelry in Franklin County. He was a jeweler in his heart to the very end. He was well known by his close friends and family for his sense of humor and his story-telling skills. He entertained countless people with his jokes and mischievous personality. He was also not censored, he spoke his mind and he lived true to his beliefs. He loved his close family very much and was fiercely loyal to those he considered a friend.

He leaves behind his brother Steven K. Sadleir, sister Reva Sadleir Hawkins, nephew Steven “Danny” Sadleir, and his two nieces Nicole Hawkins and Kelli Sadleir Olsen, as well as a grand-niece and 4 grand-nephews. He will be truly missed but never forgotten.  Memories and condolences may be shared with the family at: www.webbmortuary.com. The family would like to send special thanks to his caregivers Reed Conover and Rachelle Boyd (ARC Home Health) Butches wishes were to be cremated and his ashes to be scattered on top of Treasureton Peak overlooking the ranch where he worked with his long-time friend Jake Hicks

To order memorial trees or send flowers to the family in memory of Lewis Eugene "Butch" Sadleir, please visit our flower store.