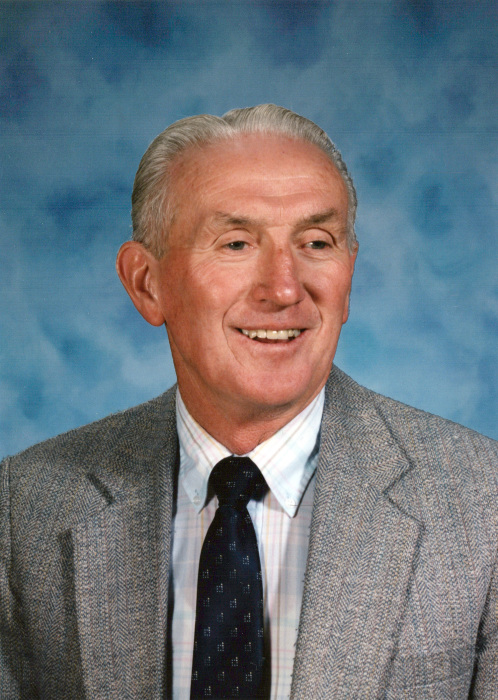 A love story continued when L. Blair Henderson passed from this life to the arms of his waiting wife, Delora Winward Henderson, who preceded him in death this previous April.  He wasn’t the same without her and though we miss them both, we know they were reunited forever when Dad died and joined Mom on Friday, the 20th of September, 2019.

Blair and Delora were married January 18, 1952, in the Logan LDS temple.  They had graduated the previous May of 1951 as members of the first graduating class of the new West Side High School in Dayton, Idaho.  Blair realized very early how much he valued education, both formal and informal, and he needed both kinds as they started their marriage together.   He worked a variety of jobs but concluded early on how much he wanted to be involved in education.  His first job after being married was milking cows in Cornish, Utah.  He quickly learned he couldn’t teach the cows anything and moved on to working with the Union Pacific Railroad.  This too, he found, was not his passion.  He then began many years of formal education with Delora supporting him the entire time.

After many years of dedication and hard work from both him and Mom, Dad received his Bachelor’s and Master’s degrees from Utah State University and an EdD from the University of Idaho in Moscow, Idaho.  With his degrees and schooling background, he spent his 40-year educational career guiding and helping others pursue their own journeys.  Thirty-five of those years were spent as Director of Special Services in the Preston School District where he also served as the school psychologist and counselor and taught English and US Government.  Previous to this he was an elementary school principal of the West Side School District in Clifton, Idaho. Blair was instrumental in structuring and executing the Preston High School Scholarship program and the Bud Elwell Scholarship Program.  His associations with the Elwell's had a direct impact on establishing and setting up the Elwell Athletic Center/Complex in the West Side School District.  Blair was involved in the planning and founding of the Franklin County Alternative High School, over which he worked as principal.  He held positions as the president of both the West Side and Preston Educational Teachers’ Association. Over the course of his career, Blair was invited several times and attended the Institute for Development of Educational Activities (IDEA) and participated in several NCATE evaluations to universities nationwide.  Through his busy career, he had many students and professional colleagues whom he often talked about and had fond memories of.

Because his family continued to grow and grow and grow during these years, Blair and Delora often supplemented his educational income with other jobs--many and varied.  Among these were gathering bitterbrush, working at the Del Monte canning factory, raising earthworms for potting soil, working with Delora in her dream of owning a commercial greenhouse, farming, raising cattle, and painting houses.

Another of Dad’s loves was sports.  He played many sports in high school, his favorite being baseball.  After high school, he continued to play on many community teams. He had a mean side arm-curve-ball pitch as well as being a great hitter. He liked to tell the story of hitting a home run during one of these tournaments earning a case of beer.  Himself not being a drinker, he gave it to a friend.  Despite his natural and hard-earned abilities and skills, when given the opportunity to go to California and play professional baseball, he declined because he and Delora felt it wasn’t the best thing for their family or his widowed mother, for whom he cared for many years. Nonetheless, he remained a stalwart St. Louis Cardinals baseball fan until the end. He loved (and cussed) the Utah Jazz and the BYU Cougars.  He attended his children’s and grandchildren’s sporting events whenever possible.

Blair told wonderful stories and his children grew up hearing stories of Liliputions.  The grandchildren looked forward to summer campfires and Grandpa reciting his story of Old Ephraim.  He loved to hear and tell a good joke, laughing until he couldn't even finish the punchline. He and Delora raised many cattle and always grew a large garden from which they canned thousands of bottles of fruit and juice.  He loved his tractor and could be found on a winter’s day cleaning out a neighbor’s drive or hauling wood in the summer with it.

Blair grew up as a member of the Church of Jesus Christ of Latter-day Saints and served in many capacities.  Some of these include counselor in a bishopric, high priest group leader, stake and ward Sunday school presidents, Sunday school teacher, home teacher, ward choir member, financial clerk, stake athletics director, ward mission leader, various scouting positions, and numerous other callings.  He said that although he never served a full-time mission, he had the mission of raising a family, a calling from which he will never be released.

Beyond his education, church positions, jobs, or “accolades’ as Dad called them, he claimed his greatest assets as his “wife of 67 years, his family of 8 daughters, 4 sons, and their spouses and his many, many grandchildren.”  His greatest goal was for all his children and grandchildren to receive an education of some kind, formal or informal, and all become outstanding, productive members of society.  Dad said that children are not “cheaper by the dozen, but they are stronger by the dozen.” That dozen has multiplied and will continue to grow and carry on the legacy Blair and Delora started so many years ago.

Please join us in honoring Blair in a viewing held Friday 27 September from 6-8:00 at the Webb Funeral Home, 1005 S 800 E, Preston, Idaho, and 9-10:30 Saturday at the Dayton Ward LDS Chapel in Dayton, Idaho.  Funeral services will be held also at the Dayton Ward Chapel Saturday 28 September at 11 am.  Memories and condolences may be shared with the family at webbmortuary.com

In lieu of flowers please donate to the Humanitarian Fund of The Church of Jesus Christ of Latter-day Saints.

To order memorial trees or send flowers to the family in memory of L. Blair Henderson, please visit our flower store.
Send a Sympathy Card