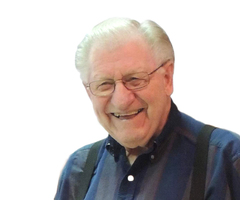 Kimber Jepsen Christensen, 87 of Preston, Idaho died peacefully at his home with his loving wife at his side Tuesday May 17, 2016.  Kimber was born June 29, 1928 to Valdemar Carl and Marcella Christensen in Mink Creek, Idaho.  Kimber is survived by three sisters, Laveda (Casey) Cleaves, Marcella Christensen, and Shirley (Don) Gundersen. He was preceded in death by his parents, his brother Kendall, sister Barbara (Marlow) Smart, and two brother-in-laws.  He grew up in Mink Creek, Idaho.  His best friends were his sisters and his brother.  Kimber attended school in Mink Creek and Preston.  He served an LDS mission to the Eastern States where he spent his entire time in New York City.

When he returned home from his mission, he married Marlene Buttars in the Logan Temple on January 26, 1951.  Kimber went into the army and was stationed in Virginia.  In January 1954, Julie, their little princess, was born.  The twins, Kevin and Kathie, followed on December of 1956.  A daughter, Penny, was next in February 1964 followed by Chad in December 1972.

Kimber was always a hard worker and worked many different jobs over the years to provide for his family.  He was Franklin county sheriff serving two terms 1963-1967.  During that time, he wrote only one ticket, had only one deputy, and never carried a gun.  He was also a Preston City Councilman.  A mechanic by trade, Kimber worked for Palmer Motor, McCune Motor and later ran both the Sinclair and Texaco service stations as well as working for Bosen’s service station.  He was also the bus supervisor for the Preston School District.  He was a member of the Preston Lion’s Club for over 50 years where he ran the Lion’s hamburger stand at the Famous Preston Night Rodeo.

His wife Marlene died August 28, 1990.  He was lost without her.  Kimber married Beverly May Hollingsworth April 13, 1991.  They traveled many places including Singapore, Hawaii, Branson Missouri, several church history trips, and 5 cruises.  Beverly died March 16, 2014.  On December 6, 2014, he married June Whitehead Rasmussen.  June wintered in St. George and he would follow June anywhere so off to St. George they went.  June loved to show Kimber around St. George and introduced him to all of her friends.  June taught Kimber to play games and they spent many happy hours with their friends.

Kimber loved the gospel and served in many callings including two bishoprics, several Elders Quorum Presidencies, and as Assistant Scoutmaster.

The Family would like to thank June for her love and devotion and for the loving care that she showed Kimber.

To order memorial trees or send flowers to the family in memory of Kimber Jepsen Christensen, please visit our flower store.
Send a Sympathy Card