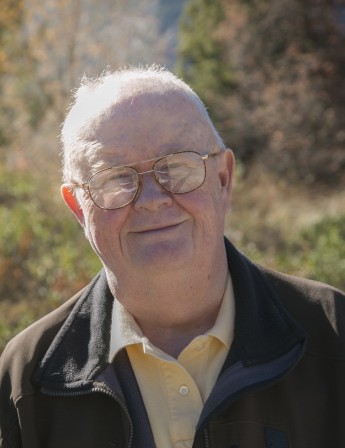 Kent Walker Smith was born on Saturday July 1, 1950 at Holy Cross Hospital Salt Lake City, Utah.  He was the first child of Dell Walker and Carmen Annie Roper Smith.  The Smith’s moved to Preston, Idaho in 1952. Kent graduated from Preston High School in 1968. Prior to graduating from High School Kent joined the Preston Unit of the Idaho National Guard and volunteered to be in the Cook Section. He later went to Boot Camp and Advanced Individual Training at Fort Ord, California and Surveyor classes at Fort Sill, OK.  Kent spent a total of 9 years in the National Guard and he loved it.

Following military training, Kent served an LDS mission to the New Zealand North Mission.  Upon his return Kent attended BYU-Provo and graduated in 1975 with a B.S. in Geology.  In January 1977 he began his graduate studies at Utah State University majoring in Geology.

While in graduate school, Kent’s sister, Kelly, introduced him to Beverly Jean Cowles.  Kent liked her because she was quiet, listened during a movie and she was beautiful.  Kent and Bev were married on August 18, 1978 in the Salt Lake LDS Temple.

After completing his graduate studies and being awarded a Master of Science in Geology, Kent accepted a job from Phillips Petroleum Company to work in their Geothermal Operation. During the course of their lives, Kent worked for ConocoPhillips as a Petroleum Geologist for nearly 35 years.  As a result of their employment, they were able to live in many varied places such as Houston, TX; Bartlesville, OK; Beijing, China; Stavanger, Norway and Anchorage, AK.  They enjoyed most assignments and looked forward to new places.

Kent was active in the Church of Jesus Christ of Latter Day Saints where, besides serving a mission to the New Zealand North Mission,  he served in a variety of callings and was always willing and happy to serve where he was needed. Kent was serving as an Ordinance worker in the Logan Utah Temple just prior to his death. Kent also served in the Boy Scouts of America as Committee member, Cub Master and Scout Master.

In addition to his immediate family, Kent is survived by his brothers and their spouses Dr. H. Vern Smith (Susan) of St. George, UT; Kim R. Smith (Richard) of Eugene, OR and sister and her spouse Kelly Jean Bullock (Gary) of Springville, UT.

Funeral services will be held on Friday, January 4, 2019 at 11:00 am in the Cub River LDS Chapel, 5307 East Cub River Road in Preston, Idaho. A viewing will be held on Thursday from 6-8 p.m. at Webb Funeral Home and Friday from 9:30-10:30 am at the church. Kent will then be buried in the Cleveland Cemetery overlooking the family farm in Idaho. Memories and condolences may be shared with the family at webbmortuary.com

Click the "Red Arrow" to listen to funeral services. You may also order copies by clicking the "Order" button.
To order memorial trees or send flowers to the family in memory of Kent Walker Smith, please visit our flower store.
Send a Sympathy Card