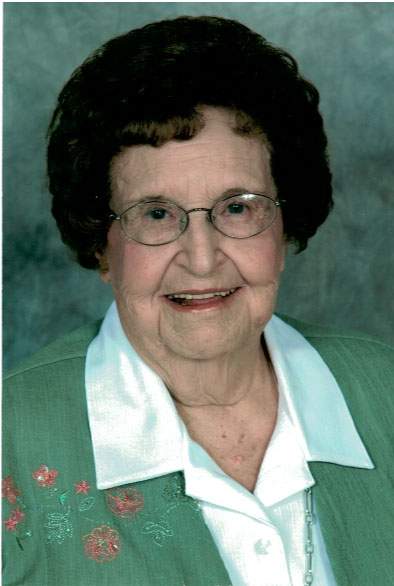 June McEntire Fischer passed away late Tuesday night, ending a wonderful life that spanned 99 1/2 years. June was born July 29, 1917, to Ira Wells and Ida Davis McEntire. She was the third of nine children. Her parents were long time farmers who owned and operated hundreds of acres of farmland west of Preston. Her father was also a businessman and for a period of time the postmaster in Preston. June’s childhood was spent helping with chores on the farm, learning domestic skills in the family home, and playing with her siblings and neighborhood friends in the open fields of her beloved Preston.

June graduated with honors from Preston High School and attended the University of Utah. She married James Glenn Richardson and they moved to Tooele, Utah where she worked as a chemist while her husband served as a sailor during World War II. When the war ended she and Glenn moved back to Preston where Glenn worked with the Idaho State Road Commission and June worked in various positions at the Preston hospital, the county offices, and as a chemist for the sugar company. They had two sons—Darryl Richardson (deceased) and Jim Richardson of Fall City, WA.

Glenn passed away at age 36, leaving June a young widow who courageously raised her sons with help from her parents and brothers. After her husband died, June went to work for the telephone company, where she worked for 32 years before retiring in 1982. She was a living, talking telephone directory. She knew almost everyone in town and could give you their phone number from memory when asked.

When her sons were grown she married Wally Fischer of Preston and enjoyed 33 years together before he passed away 22 years ago.

June served her community and her church. She was the volunteer local Red Cross representative, serving the military and their families, helping a number of service men and women get leave to come home for family emergencies. She was a Master Canner with the Franklin County Extension Office, helping people learn to preserve food safely. She served in a number of positions in the LDS Church and was an officer in the  Daughters of Utah Pioneers.

June cherished many wonderful friendships throughout her life. She was a voracious reader on many subjects, a crossword whiz, and a lifelong DEMOCRAT, much to the consternation of her two sons!

Funeral service will be Wednesday December 14, 2016 at 12:00 noon in the Preston South Stake center 55 East, 100 South. There will be a viewing at Webb Funeral Home on Tuesday, December 13, from 6:00 to 7:30 p.m., and on Wednesday morning from 10:30 to 11:30 a.m. at the Stake Center. Interment will follow at the Preston City Cemetery. Memories and condolences may be shared with the family at www.webbmortuary.com

To order memorial trees or send flowers to the family in memory of June Lovisa Richardson Fischer, please visit our flower store.