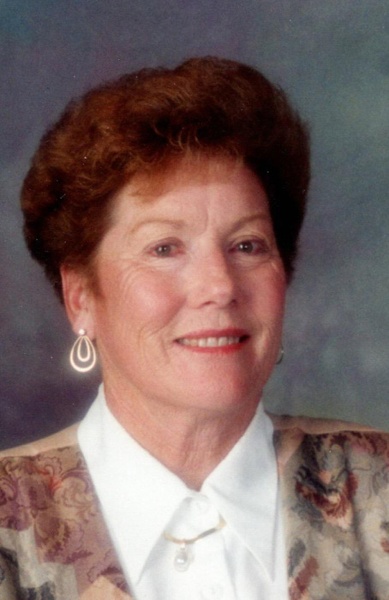 June D. Whitehead Rasmussen Christensen, a Preston area native and St. George snowbird for 30+ years, passed away peacefully in Logan, Utah on August 4th, 2019 surrounded by her children and grandchildren. June was born in Fairview, Idaho on June 19th, 1932 to John William and Pearl Day Whitehead, the youngest of 9 children. She learned many lessons of work and sacrifice on the family farm including planting, thinning and topping beets.  She attended Preston High School where she was a member of the marching corps graduating in 1950. Following high school, June went to work for the local telephone company.

On November 9, 1951, she married Ross S. Rasmussen in the Logan LDS Temple. They were blessed with three children whom she and Ross raised in Preston, Idaho. While raising their children, June made many lifelong friends working at Veda's Style Shop and Presto Products.

June and Ross were very active serving in the community and they especially enjoyed spending time together and with friends on the golf course. She and Ross were Preston Golf Club Champions for numerous years, and the glorious afternoon she shot a better score than him was certainly memorable....for her! After Ross retired, they spent their winters in St. George where they met even more friends and spent their days traveling and exploring the region on 4-wheelers and leisurely drives, playing cards and scheduling lunches with the gang. She rarely missed a Jazz broadcast or an opportunity to share her opinion of the coaching.

June served a mission at the St. George Member Locator Center during her time in St. George. After Ross passed away, June was fortunate to reacquaint herself with Kimber J. Christensen and they were married December 6th, 2014. They were able to spend a short but blissful time together. She had a very loving relationship with Kimber's family and friends.  After Kimber passed, she moved permanently to St. George where she enjoyed spending time with friends and family prior to an untimely fall in May of this year.

June was active in the Church of Jesus Christ of Latter Day Saints her entire life serving as Relief Society President, Teacher, and supporting her husband as Bishop.  June's quick wit, sharp sense of humor, and caring generosity will be missed by all.

She was preceded in death by her parents, her siblings and her husbands, Ross Rasmussen and Kimber Christensen. She is survived by her three children; R. Scott (Patricia) Rasmussen, Pocatello, Idaho; Stacie R. (Eric) Falk, Mt. Sterling, Utah; Cortney W. (Dana) Rasmussen, St. George, Utah. She is also survived by 13 grandchildren and 22 great-grandchildren.

The family would like to thank the wonderful caregivers at Sunshine Terrace Grove and Rehabilitation and Logan Regional Hospital.

To order memorial trees or send flowers to the family in memory of June D. Rasmussen Christensen, please visit our flower store.