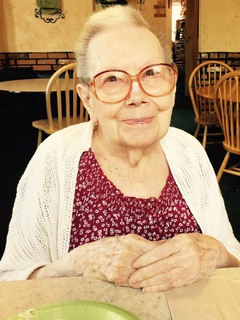 Joye Belle (Dees) Baldwin passed away on June 13, 2016, her 91st birthday, at the Heritage Senior Living facility in Preston, ID, with family at her side.  Joye was born on June 13, 1925 to Holly Anthony Dees and Emma Telitha (Riley) Dees in Wapanuka, Ok.  She was the youngest and last survivor of 13 brothers and sisters.

In her last year of high-school, Joye met and married Jerald Edwin (Jerry) Baldwin on November 6, 1942 in Atoka, Ok while enroute to his home in McAllen, TX, in the Rio Grande Valley.  Joye bore 4 sons:  Spencer Duane Baldwin (deceased in 2008) (Debra) of Preston, Idaho, Gregory Joe Baldwin (Susie) of Nellysford, VA, Mark Anthony Baldwin (Vicki) of Tacoma, WA, and Jerry Paul Baldwin (Christine) of Lake Charles, LA.  She and Jerry divorced in 1960, and she later worked in banking and resided in Oklahoma, Louisiana and East Texas before moving to Ogden, Utah in 1994, and to Preston in 2012.

In her 20s and 30s, Joye learned and enjoyed ballroom dancing, piano and sewing.  She continued her love of music, singing, and nature's beauty throughout her life.  She was also concerned with and closely followed civil, national and world affairs.  She was a member of the Alpha Pi Omega Sorority, the country’s oldest Native American Greek letter organization, and completed courses in business college where she learned shorthand and other business skills.  Above all, she was devoted to the gospel, and read and studied the scriptures continuously in order to learn and help others in their quest for truth and wisdom in the scriptures.  Perhaps the highlight of her life was having gone on a mission for the Church of Jesus Christ of Latter Day Saints to the Anaheim area of California while in her late 60s.

The family would like to thank the Heritage Senior Living and Access Home Care and Hospice staffs for their kind and helpful care.

To order memorial trees or send flowers to the family in memory of Joye Belle Baldwin, please visit our flower store.