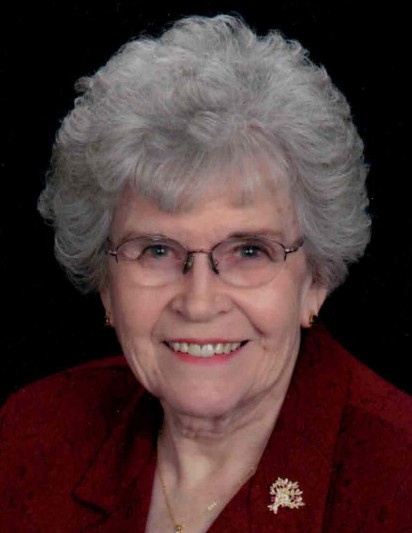 Joyce Nelson Bingham passed away peacefully on December 11, 2019, three days after her 91st birthday, with her family at her side.

Joyce was born December 8, 1928, to Carl Howard and Edna Amelia Lundquist Nelson, in Weston, Idaho.  She graduated from Weston High School in 1946 where she played clarinet in the band and was the yearbook editor her senior year.  She went on to study elementary education and fine arts at the Utah State Agricultural College (now USU).  Because there was a teacher shortage, she began teaching school at the age of 18 and taught a total of four years in Dayton and in Franklin, while she continued her education at the USAC during the summer months.

Joyce married Carl Wallace Bingham on March 14, 1951, in the Logan, Utah LDS Temple, and they settled in Linrose, Idaho.   She loved Carl’s wavy hair, his silly jokes and the way he always treated her with respect.  She found laughter in his jokes saying, “Every clown needs a clapper” and spent the rest of her life encouraging Carl, their children and grandchildren (her greatest treasures) to develop their talents and to do their best academically and in whatever else they chose to pursue.

She also taught her kids and their friends in 4-H and served as the Parent Teacher Organization president in the West Side School District.  In 1981 she was named Franklin County Farm Bureau Wife of the Year.

She had a great thirst for knowledge and loved to sit down with a good book.  She especially enjoyed reading the scriptures, studying the life and teachings of Jesus Christ.  She also enjoyed books about health and nutrition.  She loved things of beauty and surrounded her home with beautiful flower gardens.  She also loved to oil paint.  As a child, Joyce wanted to learn to play the piano, so the first thing she bought with her teaching salary was a second-hand upright piano.  With nine children, she didn’t have a lot of time to learn to play, but she gave that opportunity to all of her children.

Joyce was a faithful member of The Church of Jesus Christ of Latter-day Saints.  She loved to teach the Relief Society cultural refinement lessons and served in the Young Women organization and in four Primary presidencies.  When Carl served as a stake patriarch, she spent many hours meticulously typing the blessings for him.  She and Carl also served as officiators in the Logan LDS Temple and as missionaries in Jacksonville, Florida and in Georgia.

Joyce is survived by her husband of nearly 69 years, Carl, and by her children: Shirleen (Jeff) Gardner of Taylorsville, Utah; Elaine (Skip) Cederquist of Hayden, Idaho; Barbara (Bill) Kershaw of Garland, Texas; Howard (Chris) Bingham of Providence, Utah; Diane (Val) Nielsen of Kent, Washington; Janet (Dan) Davis of Newdale, Idaho; Karen (Gene) Godfrey of Syracuse, Utah; Neal (Colette) Bingham of Highland, Utah; her daughter-in-law Kim Bingham of Sandy, Utah; as well as her sister Vynette Burnett, 49 grandchildren and 67 great-grandchildren.  She was preceded in death by her son Ronald Bingham and by a great grandson.

Funeral services will be held Wednesday, December 18, 2019 at 11:00 a.m. in the Linrose Ward Chapel in Dayton, Idaho.  Viewings will be held Tuesday from 6-8 p.m. at Webb Funeral Home, 1005 South 800 East, Preston, Idaho and Wednesday from 9:30-10:30 a.m. at the church.  Interment will be in the Dayton, Idaho, Cemetery.  Memories and condolences may be shared with the family at www.webbmortuary.com.

The family would like to thank the wonderfully kind and caring members of the Linrose Ward, the Weston community, residents of the Pioneer Valley Lodge senior community, neighbors, extended family and the medical professionals who helped care for their mom and to enrich her life with friendship, kindness and service.

To order memorial trees or send flowers to the family in memory of Joyce Bingham, please visit our flower store.
Send a Sympathy Card