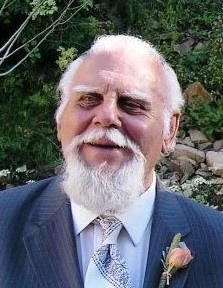 John Warburton returned to his Heavenly Father on October 1, 2019.  John was born in Bury, Lancashire, England.  He was the first of three children born to Samuel and Amelia Warburton.  John sailed to America at the age of 16 to move to Salt Lake City, Utah to pursue his dreams.  At age 19, he joined the United States Air Force.  He was stationed at Hill Air Force Base, in Clearfield, Utah when he met his sweetheart.  John married Arlene Watson Jepsen Warburton on July 7, 1956, in Mink Creek, Idaho.  Following their marriage, they were stationed in England, where they were sealed for time and all eternity in the London Temple.

For 20 years, they traveled around the world with the Air Force.  After his Air Force Retirement, the family moved to Mink Creek, Idaho to the family farm where Arlene was raised.  John began his next career completing his Bachelors and Masters degrees with honors from Utah State University.  These degrees led him to careers in Special Education and Instructional Technology.

John has always been an active member of the Church of Jesus Christ of Latter-day Saints.  He served in various callings including Stake Mission President in both Hawaii and Virginia, Branch Presidencies and Bishoprics.  John loved the Scouting Program.  He cherished his service in scouting positions for more than 30 years.  John and Arlene served together as ward mission leaders.  John lived a life of service.  He was known as Santa to many.  He and his wife spent many hours throughout the year preparing to spread Christmas joy to others.

Funeral services will be held Saturday, October 12, 2019, at 11:00 a.m. in the Mink Creek LDS Chapel with Bishop Paul McKay conducting.  A viewing will be held Friday from 6:00 to 8:00 p.m. at the Webb Funeral Home, 1005 South 800 East in Preston, Idaho, and Saturday from 9:30 to 10:30 a.m. at the Mink Creek Church.  Military rites and interment will be in the Mink Creek Cemetery.  Memories and condolences may be shared with the family at webbmortuary.com.

To order memorial trees or send flowers to the family in memory of John Warburton, please visit our flower store.