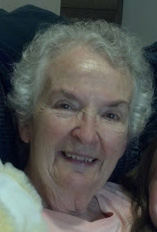 Jeanne Wirthlin Wilding, 85, passed away Monday, February 18th, in Salem, Oregon.  She was born May 6, 1933 in Murray, Utah to Paul William Wirthlin and Alice “Carroll” Jane Park Wirthlin.  She was the oldest of their 4 children.  She married Glenn S. Wilding May 7, 1954 in Salt Lake City, Utah.  They were sealed on September 17th, 1959 in the Salt Lake Temple.  Together Glenn and Jeanne raised three children.  Kimberlee, Jeffery Glenn, and Jennifer.

A few years after Glenn’s passing, Jeanne married Kay Snow Coombs for time in the Mt.Timpanogos Temple.  They were sweet companions until Kay’s passing in December of 2012.

She was an active member of the Church of Jesus Christ of Latter-day Saints and served valiantly in the callings she was given.  She was a faithful visiting teacher and touched many lives.

Jeanne was a wife, mother, grandmother, and great-grandmother.  After raising her kids, she became a Certified Nurse’s Assistant and worked as a home health aide for about 15 years.  She dearly loved taking care of others.

She was preceded in death by her parents, her two brothers, Ross and Paul, her husband Glenn, her second husband Kay, and her great grand-daughter Stetsan.

Click the "Red Arrow" to listen to funeral services. You may also order copies by clicking the "Order" button.
To order memorial trees or send flowers to the family in memory of Jeanne Wilding, please visit our flower store.
Send a Sympathy Card