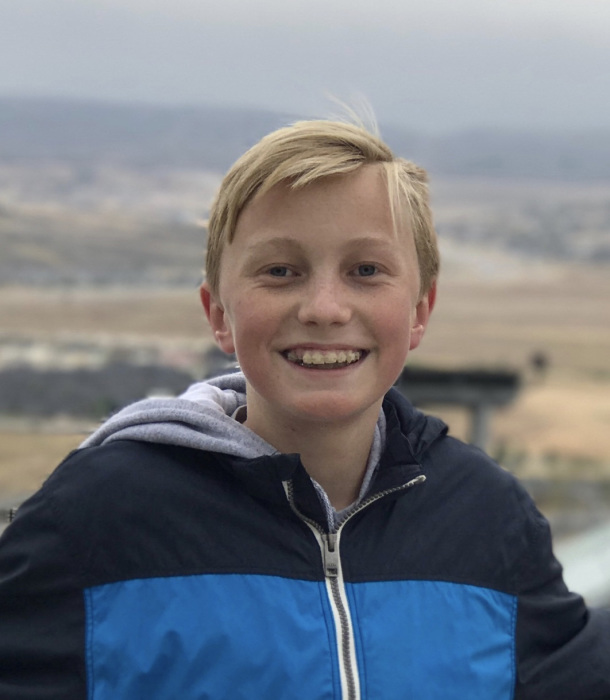 Isaac Brian Johnson, returned to His Heavenly home Sunday, October 1, 2017, in Salt Lake City, Utah, surrounded by his family.  Isaac was born with a defective heart valve and underwent open-heart surgery at the age of seven.  On September 27th, he collapsed at a cross country practice when his heart failed, and he went into cardiac arrest.   He selflessly gave his family time to say goodbye before succumbing to the frailties of mortality.

Isaac was born to Brian Richard Johnson and Becky Child Johnson on Friday, October 8, 2004, in Salt Lake City, Utah.  He was truly a divine gift to their family.  Isaac always loved improving himself and others while in this life.  At a young age, he loved watering the garden, cleaning up the community pond with his mother, and teasing his dog, Henry, by playing the recorder.  At the age of three Isaac and his mother moved to Preston, Idaho, where he enjoyed growing up in Cache Valley.  Isaac grew up as the only child in his family, but was adopted as a little brother by three beautiful aunts, Christina, Elizabeth, and Abbey.  They enjoyed him as he grew up living next door to Grandpa and Grandma Child, and he enjoyed them.

He loved participating in Rising Stars, community soccer, cross country, piano, ballroom dance, and student government.  He enjoyed water skiing and boating, going to Lake Powell with dad, four-wheeling, snow skiing, biking, and playing with his family and friends.  There wasn’t anything that Isaac did halfway.  He loved school and learning and couldn’t wait to be a missionary, husband, and father.  He was excited to complete his bug collection for Crosland – always enjoying opportunities to learn and grow.  He was proud to receive his Life rank in the Boy Scouts last month and was looking forward to receiving his Eagle Scout Badge in a few months.  He was an active member of the Church of Jesus Christ of Latter-day Saints serving in his Deacons Quorum and as the Priesthood Pianist for his ward.  He planned to build roads as a civil engineer so he could properly support his family.  He had it planned, and he was always one to follow through.

Isaac has touched so many lives in the thirteen years that he has sojourned upon this Earth.  He is kind, submissive, patient, and perseveres to the end.  He enjoys the young and the old and everyone in between.  Isaac was too good for this world.  And now he is fulfilling his callings on the other side of the veil.  Save us a place on the other side next to you, Little Buddy.

To order memorial trees or send flowers to the family in memory of Isaac Brian Johnson, please visit our flower store.
Send a Sympathy Card