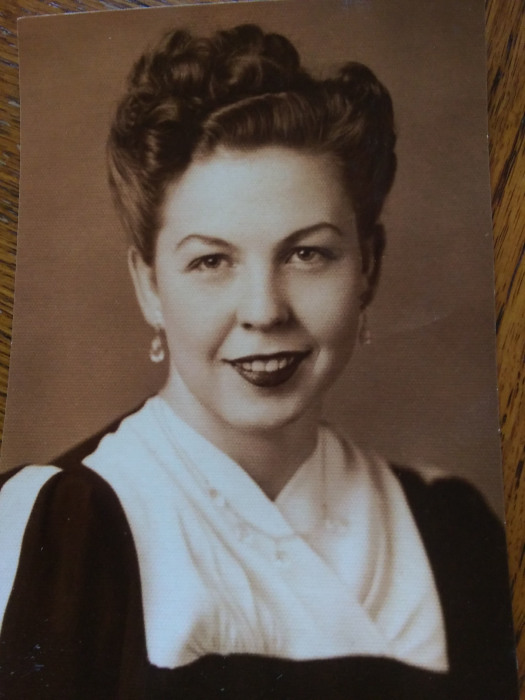 Irma Fae Wilson, 95 passed away peacefully on Saturday December 7, 2019 at Country Pines Retirement Community in Clinton, Utah.  Fae, as she preferred, was born in Buhl, Idaho to Guy L. Wilson and Marguerite Dennis Wilson.  She attended elementary and high schools, including seminary in Malad, Idaho, graduating May 21, 1942.  She met and later married a high school classmate, George E. Wilson, no relation, in the Salt Lake Temple October 31, 1942.  World War II was on and looming in their future. They moved to Provo, Utah, close to her parents, where the first son, Newell (Kathy) was born.  The next few years took her away from Idaho and Utah to be with George in New York and Louisianna,  returning to Malad when George was deployed to the Asian Theater.

Her second son, Nolan (Jena) was born in Malad after George returned from the war.  The couple moved with the 2 boys to Roy, Utah on the promise of obtaining work at Hill Air Force Base.  There they built, sold and rented out several homes in Roy, Uinta and Layton until retirement. Four more sons blessed the family, Nacey (Ila), Niven (Jeanne), Neldon (Marlene) and Nickolas (Pam).  Fae was a busy and dedicated wife and mother to her 6 sons.  She was very proud and loving, taking a close watch on their education both spiritually and mentally.  The family was active in the LDS church holding many positions.

When George retired, Fae agreed she would like to return to a life on-the-farm.  They sold out of Utah and bought a farm in Cornish, Utah.  This didn’t work out as well as planned and they moved several times ending with a micro-farm in Winder, Idaho.  Fae loved it there but hated being so far away from the kids, including her many grandchildren.

It was no secret that Fae wanted to have a daughter.  This didn’t happen but she reached out to her daughters-in-law as if they were her own.  She was a great mother, accepting and caring for all those around her.  She had a great life and outlived her family of eight, her husband George, son Nolan and son Nacey.  She loved to cook and was good at doing everything it takes to get a family organized, clean and prepared for life’s challenges.  Who would have thought that a small town country girl armed only with a high school diploma and a resolution to do good, could effect and build a great love that touched so many.  She was happy, smiling and always  straightening up things at the very end.

Fae’s family would like to thank the staff at Country Pines for their attentive care, support and love as she dealt with the debilitating progression of Alzheimers disease.

Funeral services will be held on Saturday, December 21, 2019 at 1:00 pm at Webb Funeral Home, 1005 South 800 East in Preston, Idaho.  Viewing will be on Saturday, December  21, 2019 at 12:00 until 12:45 pm also at Webb Funeral Home.  Interment will immediately follow at the Cornish Cemetery.  Memories and condolences may be shared with the family at:  www.webbmortuary.com

To order memorial trees or send flowers to the family in memory of Irma Fae Wilson, please visit our flower store.
Send a Sympathy Card